I post here all the time about working on my bikes, but I do more than work on them. I ride them. I put several thousand miles on my bikes every year; I’d do more if the weather was more cooperative. My insurance company actually told me that many people only insure their bikes for six months out of the year… I do all twelve. You never know when an unseasonably warm day will come along in the winter.

But one thing I hadn’t done in over 35 years is ride with another rider. That is, until last week when my friend Joe mentioned on social media that he had his Honda Shadow 1100 cleaned up and ready to ride… so I invited him. Joe’s not from Missouri, and consequently he’s not nearly as familiar with the paved back roads as I am. He asked me to lay out a ride that would show him some of those roads, so I did. 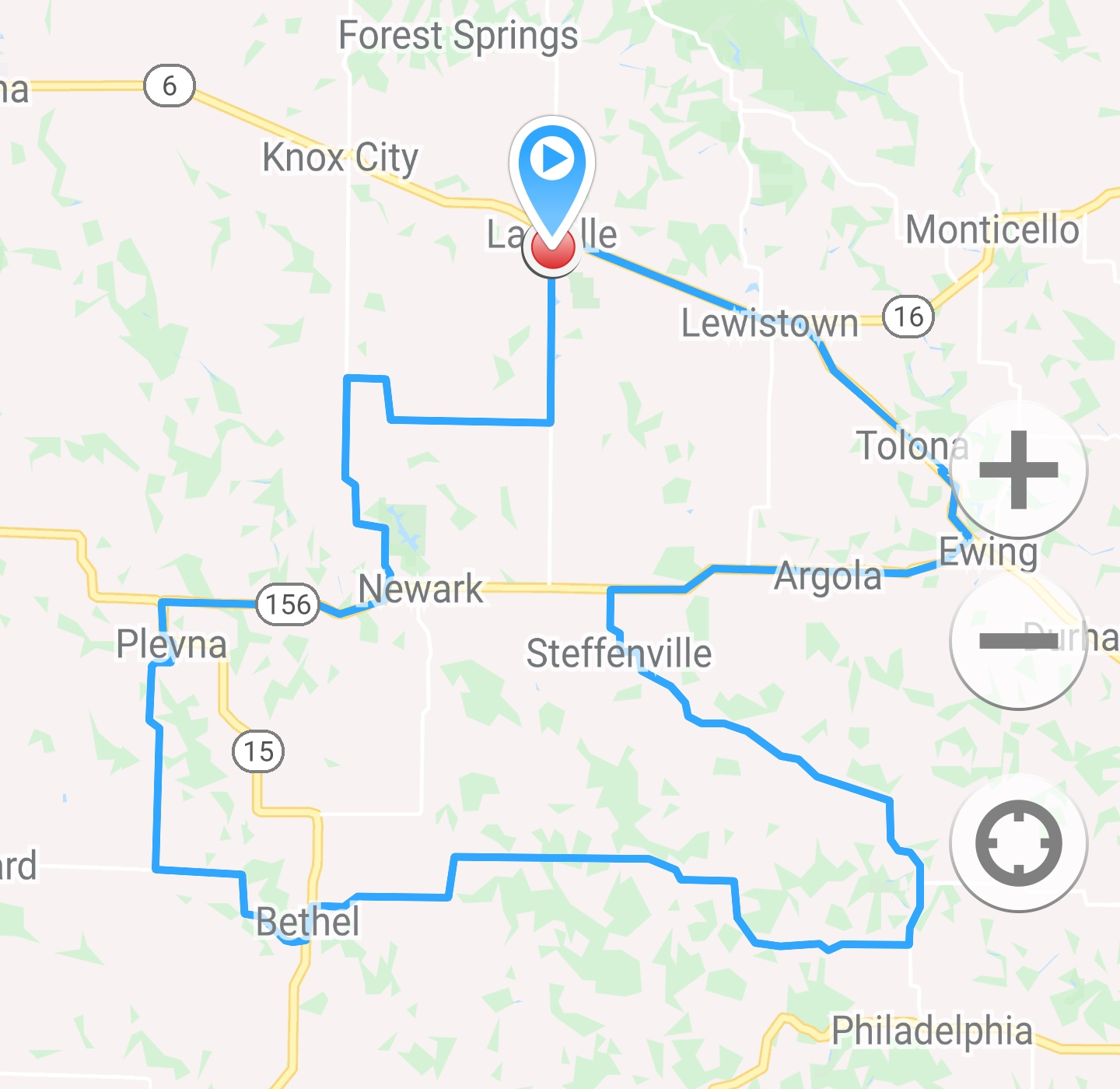 It was a beautiful Friday afternoon, mostly clear and about 80° F.  I decided to ride my CB650, putting us both on Hondas (though Joe had a significant advantage in CCs).  I left home from La Belle heading east on Missouri Highway 6, and met Joe at the Highland High School parking lot near Ewing.  From there we followed Highway 156 to the junction with southbound Lewis Co. Route D, which is where we left the roads Joe was familiar with.  Route D is a ridge road, which is probably my favorite kind.  As you can see, we didn’t quite get to Philadelphia before turning right onto Marion Co. Route J, which took us into Shelby County; despite how it looks in the image above, J has some really nice curvy bits.  At Bethel we’d been riding about an hour, and I asked Joe if he wanted to take a break or continue.

He voted continue, so we dropped down Highway 15 through town to the turnoff to Shelby Co. Route M; the eastern end of that road is both curvy and beautiful.  We turned north at Epworth on BB and followed it up to Plevna, ran a little bit of 15 north to the 156 junction, then proceeded east.  Now Highway 156 has many interesting parts, curvy pretty parts, but they aren’t close together.  The section from where we turned east to about Newark is one of those really nice bits, including some S curves and a left curve into a kinda steep drop to a right across a small bottom to a bridge, and I felt sure Joe would find it as entertaining as I did.  Before we got to Newark we turned north on Knox Co. Route E, another curvy pretty section of road running up the back side of the Newark Sever Lake.  It straightens out a bit before the junction with Knox Co. T and U; U goes east to D, just about 4 miles south of my house.  So we went that way.

Overall my track length was about 89 miles, averaging 52 MPH while moving; I use Geo Tracker on my phone to make tracks like the one above, and the app also gives me statistics.  For example, we covered an altitude difference of right at 200 feet… not that it matters at all, just fun that I can find that out.  Joe’s track length was shorter at my house, obviously, but he had to cover the same distance going home that I did meeting him in the first place. 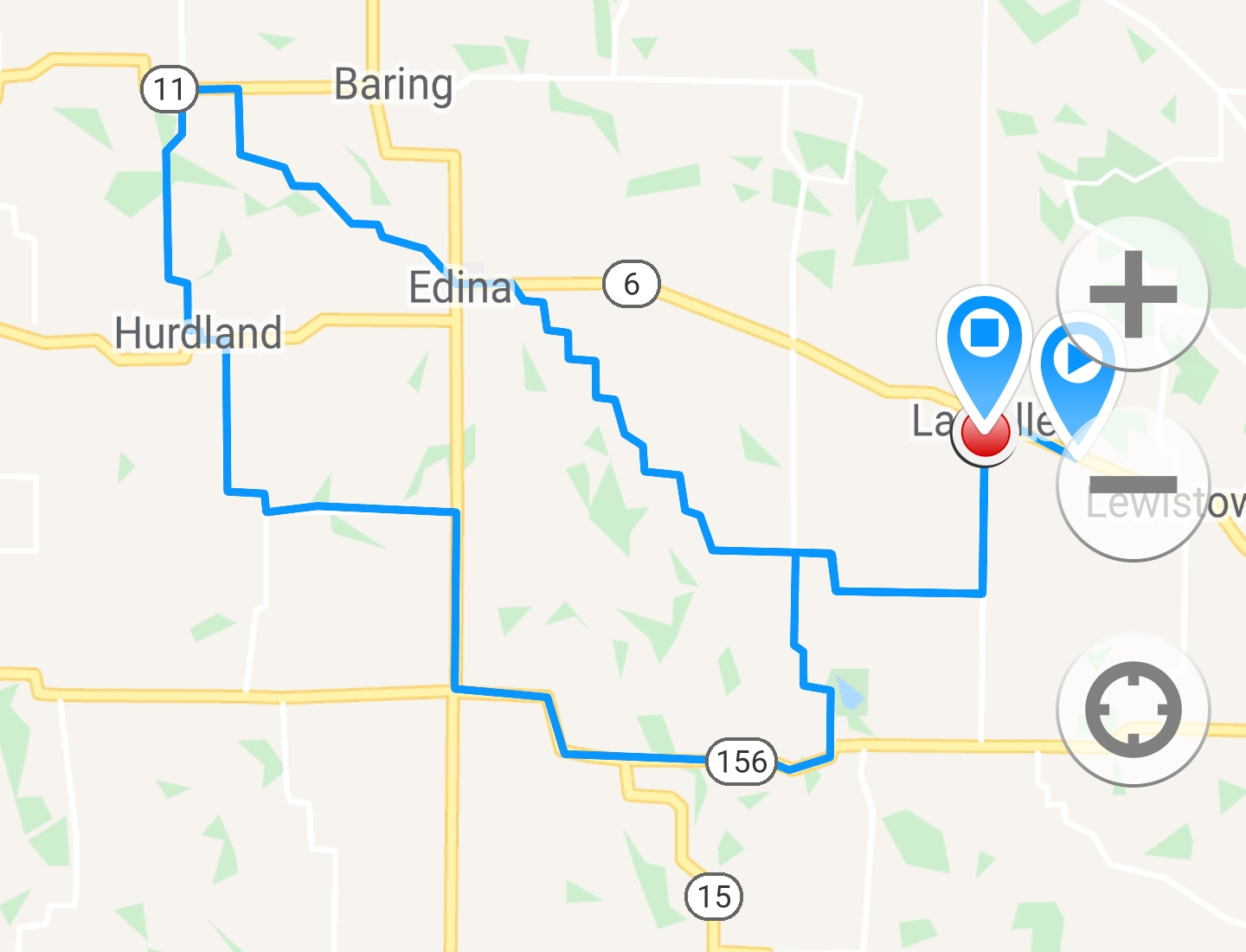 We decided to do the same thing the following Thursday, as wet weather was forecast for the next Friday.  I chose my Yamaha XS650 for this ride, and since I never fill it up before parking it (the fuel cap seal isn’t quite as good as it should be) I had to make a run out to the FS station to fill it up… that’s the little extra at the start of the track above.

This time I promised to show Joe the ridge roads in Knox County, Missouri, where I grew up and where I learned to ride.  My plan was to run up Bee Ridge aka Knox County Route T, pass through Edina to Rabbit Ridge aka Route P, go west and take Route J south through Hurdland (my home town).  From there we’d go a short way down Highway 6 to Route A, then south to Route F, then east to where Route F joins Highway 15 almost but not quite lined up with Route TT.  Now TT is a ridge road, though I don’t know the name of the ridgeline it follows.  Everything went according to plan until we reached TT… the road was closed.

SO ANYWAY, we had to find another route.  I copped out this time, as we turned south and took 15 to the same 156 junction we’d turned off at the last time, and proceeded in much the same way.  At the end of U just south of my house, Joe turned right to go to his home another way.

My track length this time was 90 miles, but that includes three miles back from the FS station where I gassed up my bike, so 87 miles.  Pretty close to the same ride length for me, though Joe rode probably 30 more miles or so.  Average speed moving was 51 MPH.

Joe and I ride differently.  His bike is bigger and more powerful than either of mine, and if he’s riding point on the straights I have to work to keep up with his acceleration.  But his bike is more work to get around the corners, so he slows down a bit for the curves.  If I’m riding point, I have to remind myself not to ride the way I usually do… I may not ride all that fast, but I don’t slow down for corners if I don’t have to.  Sometimes I forget and hit them like usual, and when the road straightens I see Joe’s bike in my mirrors roaring up to catch me.  (If I can see anything in them… the mirrors on the XS650 are almost useless above 35 MPH.)

And, as I said, the last time another rider joined me on a ride was over 35 years ago, and that friend passed decades back.  I had to learn how to ride point and wing both all over again.  On both rides I sent Joe riding point any time I knew a road ended in a stop sign, where we could switch back; it gave me needed practice riding wingman, and also let Joe experience the unfamiliar roads more directly.

BUT I wasn’t done yet: 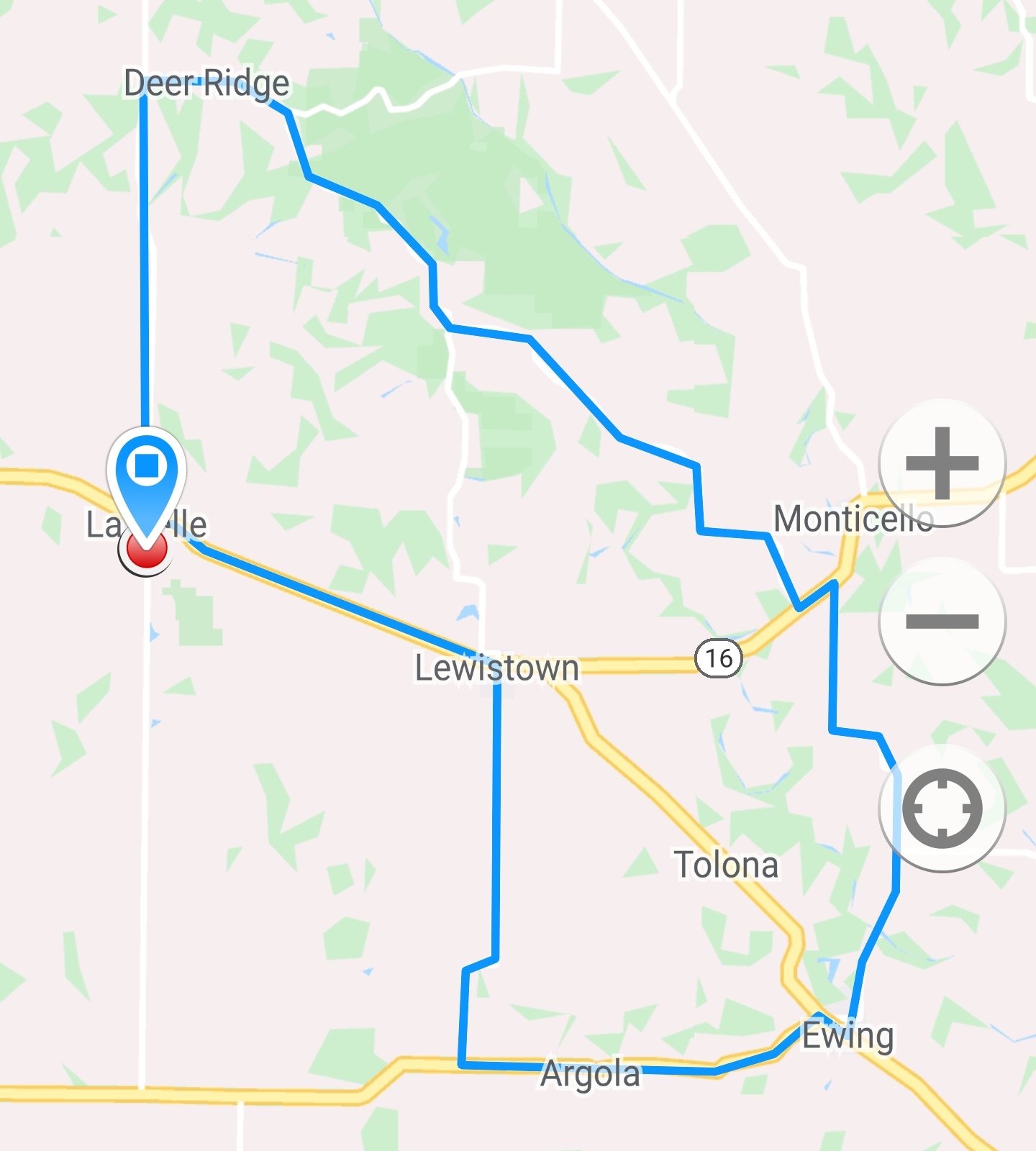 That Thursday was just a gorgeous day, and as we had ridden in the afternoon I had the evening free.  The day had been cloudy, which was a mercy as it otherwise would have been kind of hot; the clouds cleared up some in the evening, but the temperature dropped a bit so it was still really nice out.  I was helping my wife with some work in the yard, but she could see I was itching to ride before the forecasted rain came and she told me to go, already.

So I did.  My phone was almost run down, but I had softside saddlebags on the Honda, so I plugged the phone into my “emergency” battery, strapped them together and put them in the saddlebags.  I run an app called Enduro Tracker to allow my wife to track my position; I hope I never need her to come find me when I’m unable to operate my phone, but if she ever needs to, she can.  So I wasn’t taking the phone for calls or texts, just for the tracker.  And I made a track too, just for fun.

North out of La Belle on Route K to Route Y, known as Deer Ridge Road from that junction to the tiny town of Midway (which doesn’t even appear on the track above, but it’s at the junction due north of Lewistown).  It’s easily my favorite road that I can ride regularly.  At Midway I stayed on Route Y, which involves a left turn (don’t ask me, I didn’t lay these roads out).  From Midway to the Highway 16 junction I believe it’s called Irish Ridge, and while that section isn’t as twisty as the Deer Ridge end, it’s still really nice and pretty.

Normally I’d just turn and go home at that point, taking Highway 16 to Highway 6 at Lewistown, then on home to La Belle, but it was just such a nice evening.  I wasn’t ready for it to end yet.  So I turned left instead, then right onto Route BB.  BB turns somewhat seamlessly into Route C southbound into Ewing (again, I didn’t design these crazy roads) and at Ewing I took Highway 156 out of town.  I said above that 156 has interesting and less interesting sections, and the part near Ewing is one of the better bits.  Normally I’d have gone all the way to the northbound junction for Route D, and then gone directly home, but this time instead I turned onto Route J and went north to Lewistown, and then home on Highway 6, making a stop for gas at the FS station east of town.

The stats page says I did an average of 52 MPH moving, and went 50 miles.  Altogether the ride took me an hour or just a hair more; I forgot to stop Geo Tracker when I got home, so I don’t have an accurate ride time.  An hour at a time is usually my limit when riding by myself… I really like to take a break every so often, get off and walk around and clear my head.

But of course, as I was by myself for that last ride, I didn’t have to worry about running away from anyone (or, just as significantly, keeping up with someone).  It’s fun to ride with other bikers, but it’s also fun to go at your own speed.