I got in my first real ride of the year on the CB650 on Saturday (March 28th).  Made a loop in the early afternoon, north on Lewis county route K, then right on route Y aka the Deer Ridge Road.  I’ve said before, I love the ridge roads, and when I’m wanting a quick ride Deer Ridge is usually my choice.  It’s a bit chewed right now, needing some attention from the highway department, but thanks largely I think to the ongoing pandemic, it was pretty much empty.  Deer Ridge (the ridge itself, not the road or the town) ends more or less at the town of Midway; there, route Y hangs a left and becomes Irish Ridge.  Not a lot of people around here use the name; it may never have been popular, but I know of at least one landmark on that ridge that still bears the name: the St. Patrick Irish Ridge Cemetery.  It’s twisty, not as twisty as the Deer Ridge section, but enough to be fun.  It runs out on a hilltop where it connects to Missouri Highway 16, and from there I take a right back to Highway 6 at Lewistown and thence to La Belle.  If I want a shorter loop, at Midway I just keep going straight onto route H, which in turn drops me at Lewistown.

Saturday I took the longer loop.  The weather was partly cloudy and humid, and just warm enough that I thought I could go without my jacket; a mistake, as the sky clouded over and the temperature dropped almost 10 degrees.  Still a good ride.  My wife told me on my return that we needed to go pick up some groceries she had delivered to our daughter, so we did that, loading the car in a rainstorm.  We drove out of it on the way home, and when I got there it was really, really nice, sunny with a few scattered clouds, and the temperature was back up over 72° F (about 22° C), and so I rolled the CB650 back out for another ride.

South this time, route D to route U west.  I planned to pick up another ridge road, Bee Ridge, which is Knox County route T.  It’s twisty and nice, a lot like Deer Ridge but not as many ups and downs.  However, just as I came up to the intersection, a pickup truck turned west in front of me.  Naturally I didn’t want to follow him, and while I had about a mile or so where I might have been able to pass, instead I turned left and ran route E to Missouri 156, enjoying the better (curvier) parts of both, and then ran route TT from southeast to northwest.

TT is a ridge road, but if it has a name I’ve never heard it.  But it’s beautiful, less curvy and more hilly than the others but still quite nice.  It runs out at Missouri 15 a few miles south of Edina, which is where I paused to take a break.  I’d been on the road about an hour, and I always try to text my wife when I’m out riding every hour so she doesn’t worry about me.  And my butt, out of shape from a winter spent on the couch or in my car, was needing a break.

When I was done with that I headed west out of town, then took a right at the bottom of the hill onto the northwestern end of Bee Ridge Road (route T, as mentioned above).  It’s as good in one direction as the other, and I thoroughly enjoyed it.  Then back down U and up D to home.

It’s really nice to have the CB650 back in service after doing without it last year.  The head gasket repair seems solid, and the repairman changed the plugs while he was at it.  I had Reo’s Rides in Kirksville, MO do the work for me, and I couldn’t be happier.

Still, there are always things to do with a vintage bike.  One annoyance on the CB650 was the kickstand; the tang you’re supposed to push with your foot to lower and raise the kickstand.  You see, the original broke off a couple of years ago, just before I benched the bike because of the head gasket leak.  So I got this:

The kickstand is a bit larger in diameter than I thought, and so I had to use, um, “excessive force” to install it, and yeah, it failed me, but I’m pretty sure it’s not because of the “excessive force” bit.  Here’s what it looked like after basically one ride (the first one from Saturday, as described above): 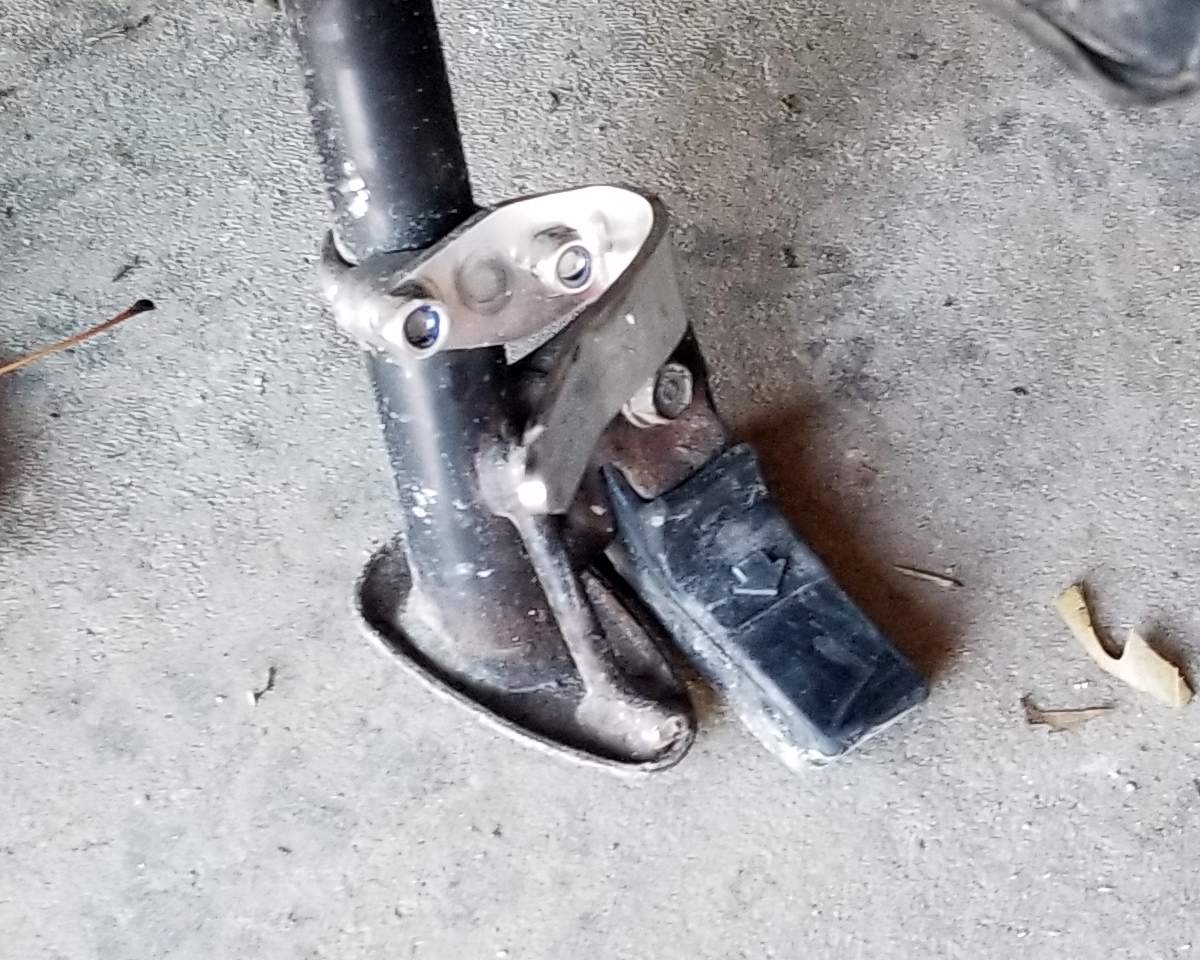 A picture, as they say, is worth a thousand words.  That bend came from pressing down on the tip of the extension with the edge of my rubber-soled sneaker.  What a disappointment.

So I dug around my shop and found a piece of 3/16″ thick, 1″ wide steel bar, got out my grinders (one with a cutting wheel, the other with a grinding wheel), and with the added assistance of my bench vice I made this: 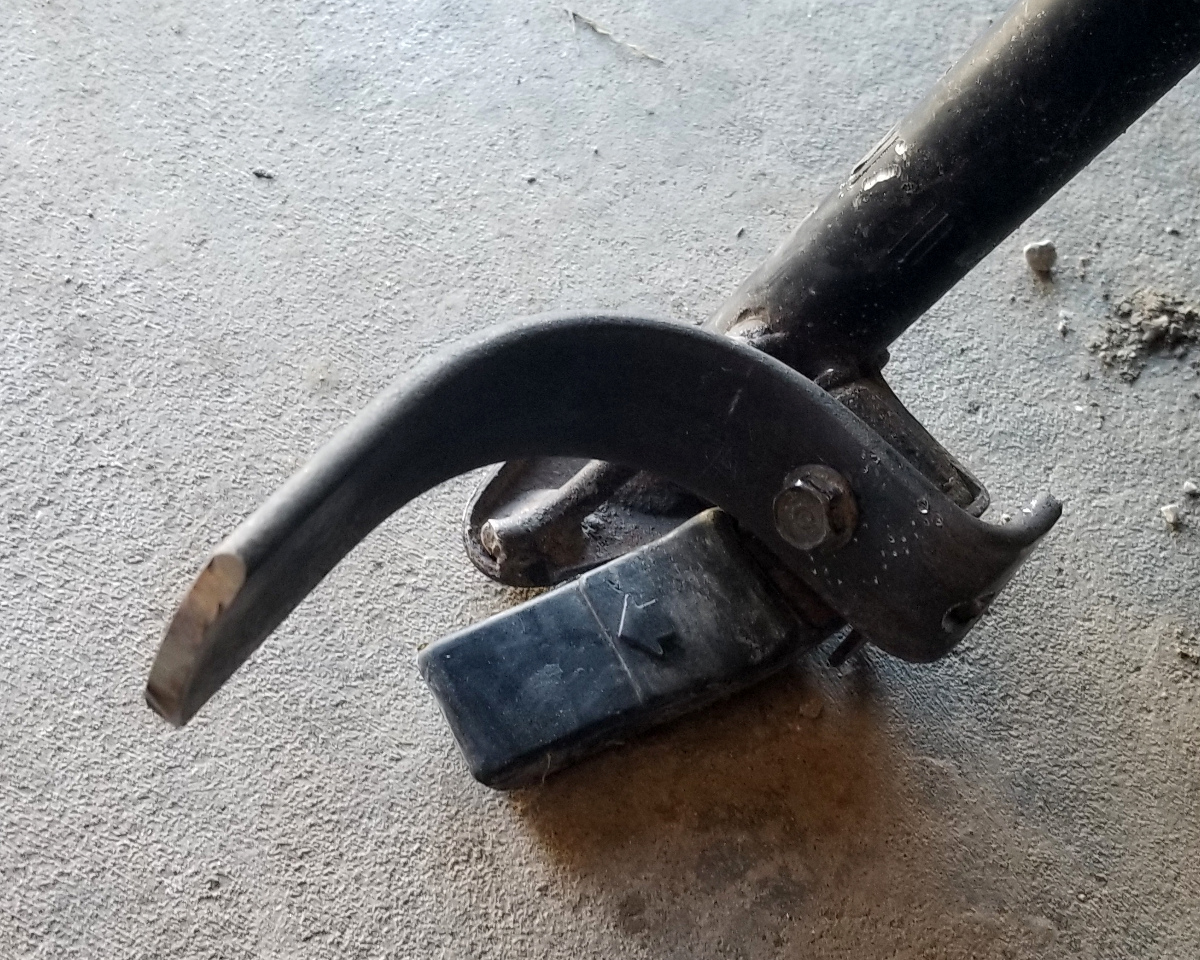 I didn’t take a picture of it folded up, but it tucks nicely up under the exhaust with just a bit sticking out for my shoe to catch.  And it’s a lot thicker and stiffer than the Krator part.  Honestly, I cannot recommend that item to anyone… it’s just not strong enough.

The other thing I did in the last few days is to upgrade my turn signals.  If you’ve read my earlier posts, you know that the bike came with an ugly, beat-up Vetter Quicksilver fairing on it, and one of the very first things I did was pull it off.  This left me without headlights and signals, and so I bought some aftermarket parts.  But the first set of aftermarket blinkers are small and did not fit the style of the bike, so eventually I bought a second set, which are still too small but at least looked kind of like they belonged.  Here’s a pic from a couple of years ago showing them: 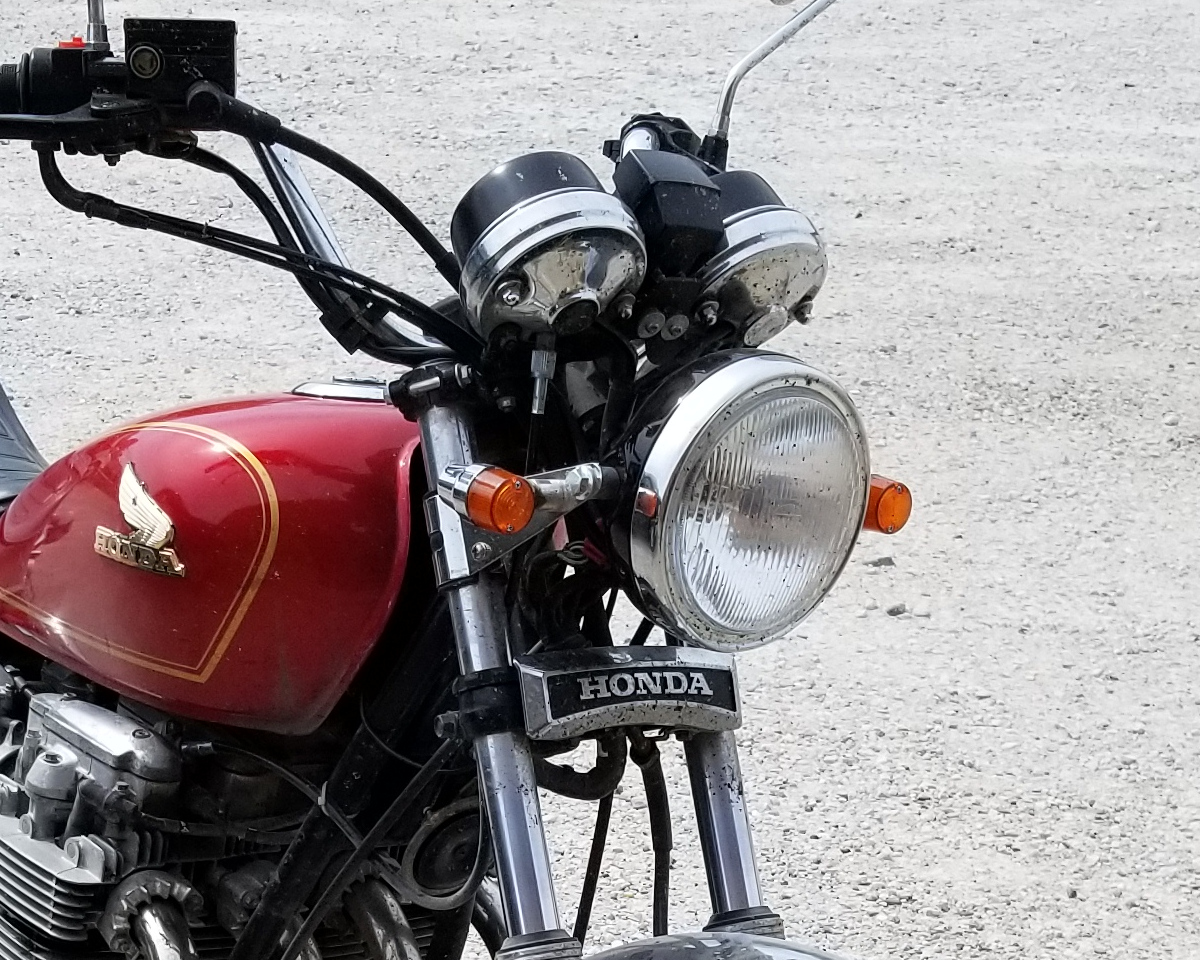 Last year at a garage sale in an actual automotive garage (former gas station/repair shop, long closed, but still cool) I found a pair of Honda signals.  They are from an early ’70’s CB350, or so I was told, and I’m pretty sure they came from the back of the bike; they are one-wire-and-ground, which supports that theory.  But they are smaller than the rear signals on the CB650 and fit the style fairly well, so this weekend they went on: 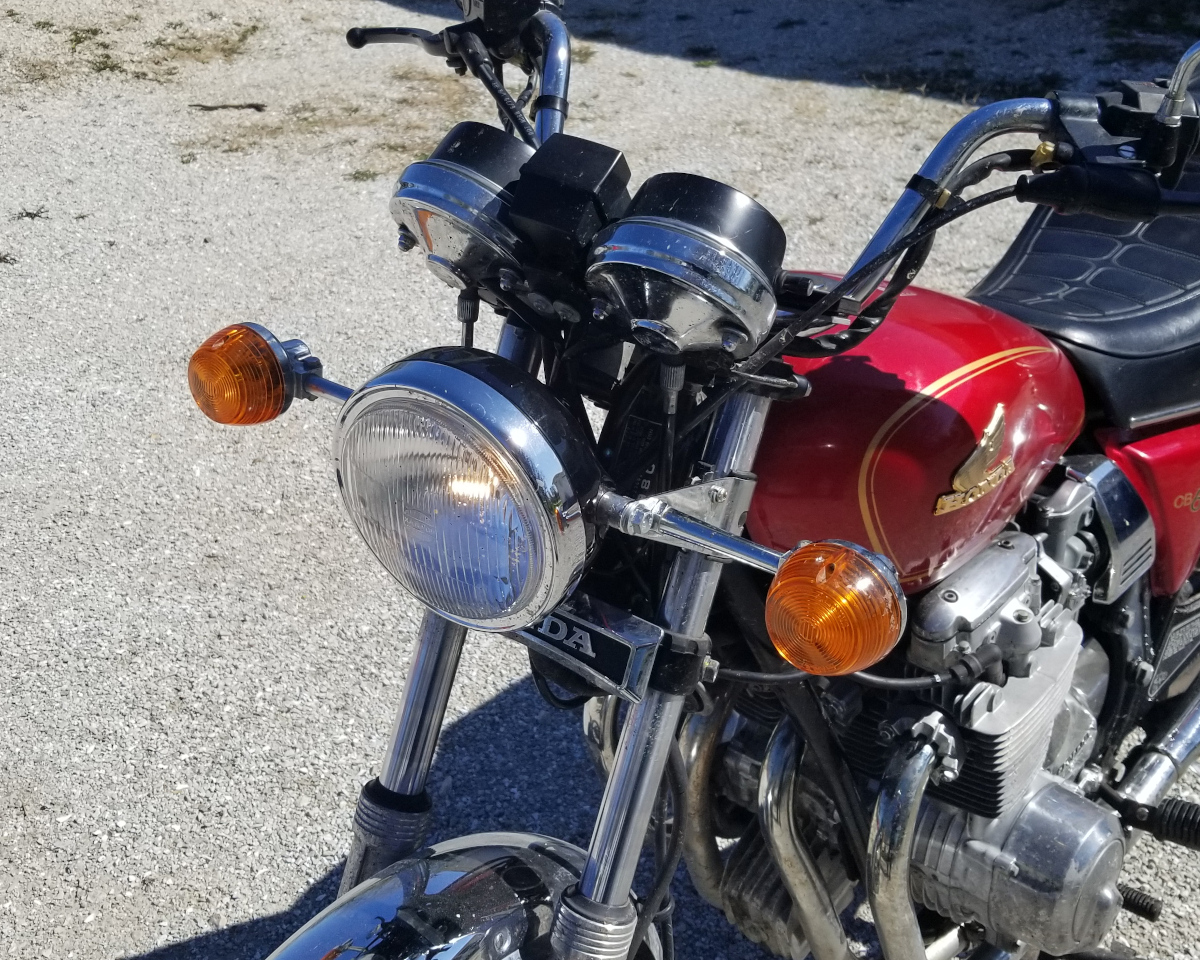 Nice, eh?  While I had the headlight off and was figuring out the usual installation issues, I noticed that the bike turns off the marker light function when it turns on the blinkers.  I realized correctly that I could hook both functions up to the blinkers and they would work fine, even though there’s only one filament.  What I failed to understand is that the marker light voltage would go the “wrong” way back toward the blinker circuits, making the rear signals into marker lights and keeping the turn signal idiot lights on solid when the blinkers are not engaged.

I had a similar problem with a DIY model rocket launch system a few years ago; arming one of the four launch positions would light up all the arming indicator lights, due to voltage going the “wrong” way through the circuit.  The solution was obvious… I needed a diode in each arming switch circuit, ensuring that the voltage only went the way I wanted it to go.  That answer will work here as well… a diode in each line between a turn signal output connector and the matching front turn signal will allow the blinking voltage to go where it’s supposed to, while blocking the marker light voltage from going the wrong way down that wire.

So now I have to find appropriate diodes.  It wasn’t too hard on the launch controller, so I’m hoping it won’t be too hard on the bike.  But if this works, it will be darned nice.