HOKAY DOKAY. I did some things:

First, I unscrewed the headlight and tried to open it up. Tried, and failed… it would come out half an inch and catch. Took me a bit of messing around to get into it, and when I did I discovered the problem was those screws that allow the sealed beam (as 5twins mentions) to swivel when you adjust it side to side.

See, the large rubber washer thing and the metal washer were on the outside, and there were no nuts on the inside. Seriously. I had to go back and review the fiche to make sure I understood how it was supposed to go together. As I was marveling at how screwed up it was, I found the missing nuts (and those two little bushings)… lying in the bottom of the headlight bucket, trying to fall out on the floor.

I brought all the bits into my office (where I normally service computers), laid it out on my workbench and took it the rest of the way apart. The rubber ring that goes around the sealed beam? Not lined up with the bumps. Nor were the bumps lined up with the reliefs in the metal ring where they were supposed to be.

So I carefully put it all back together as indicated in the parts fiche, and it looks a lot better now.

Then I turned my attention to the turn signals. Here is the right signal, before: 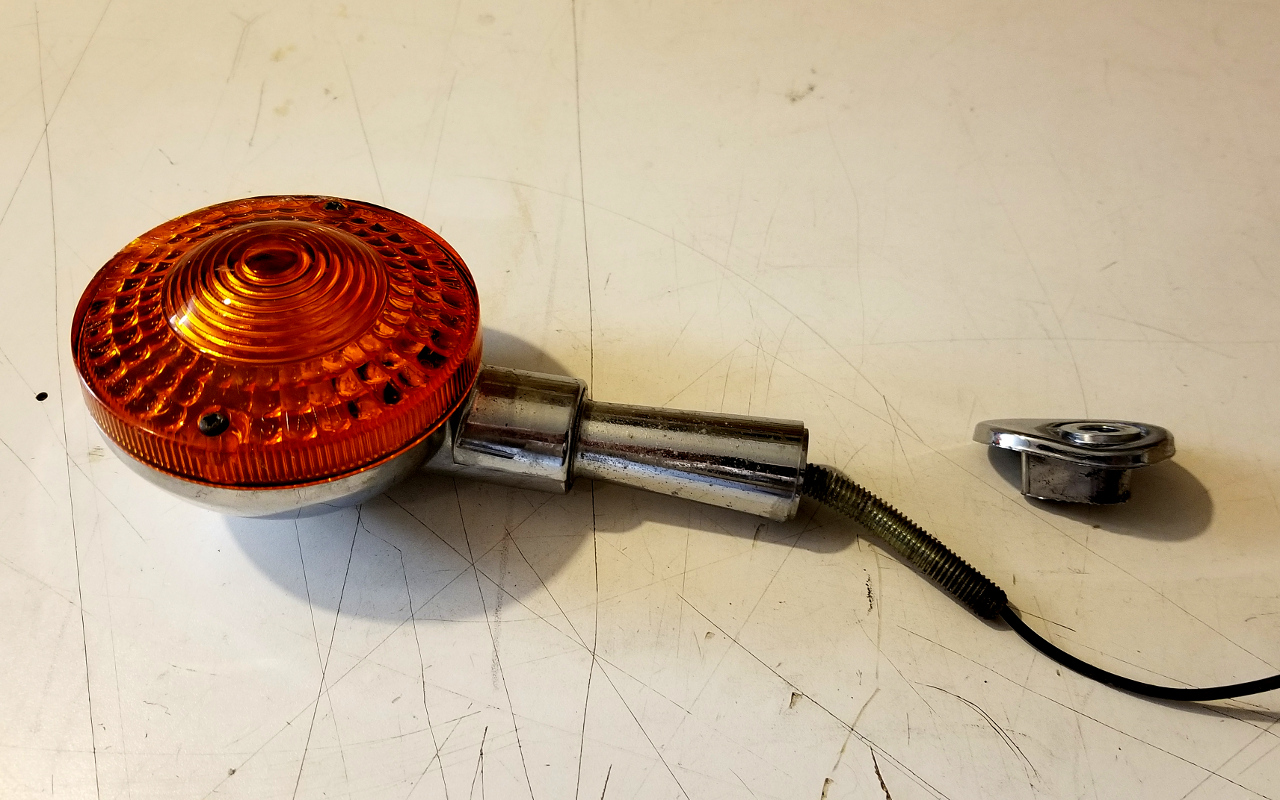 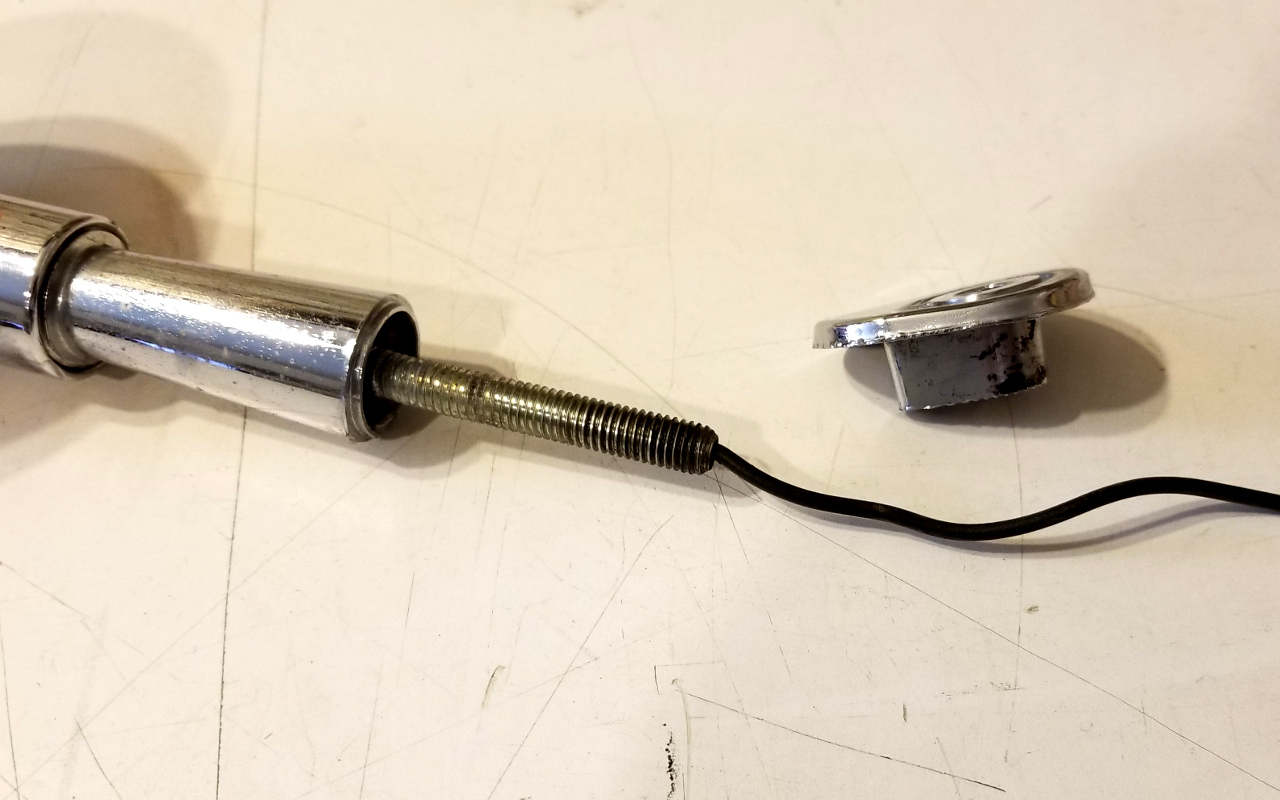 And the left, before: 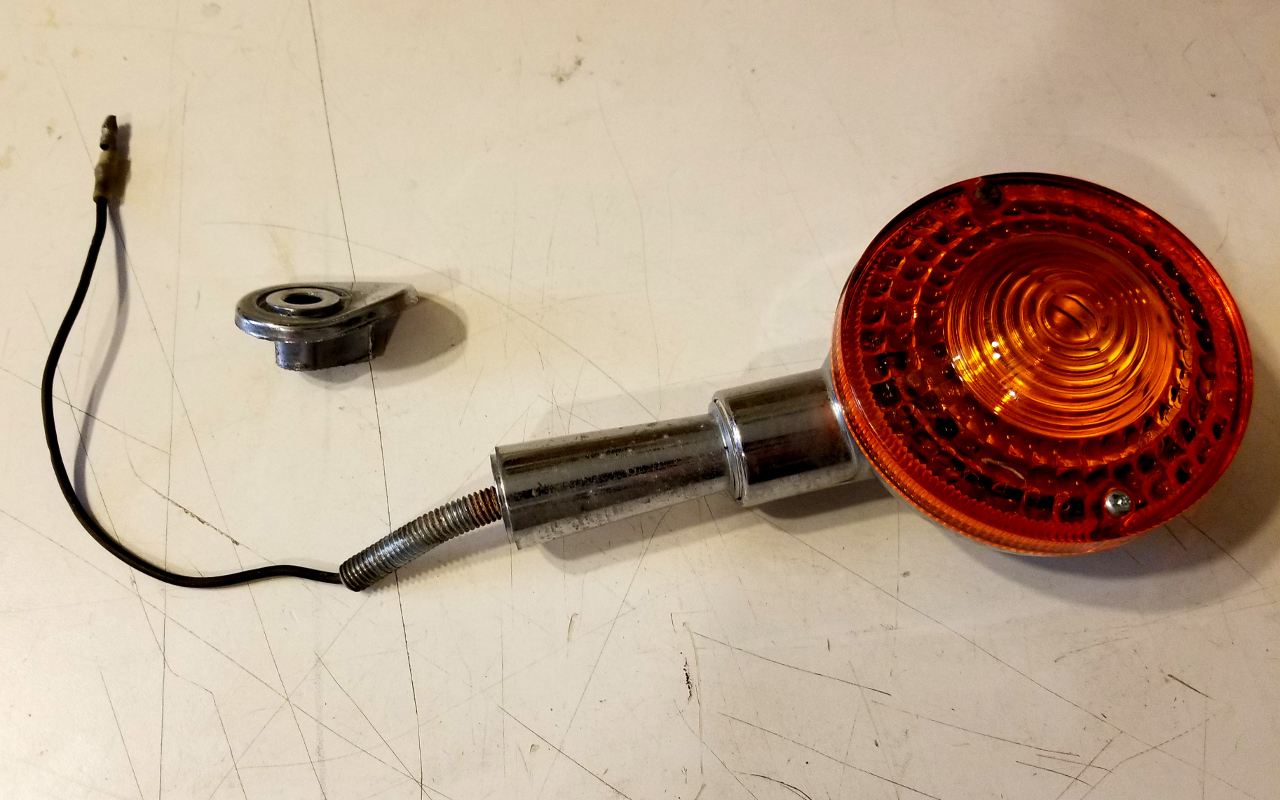 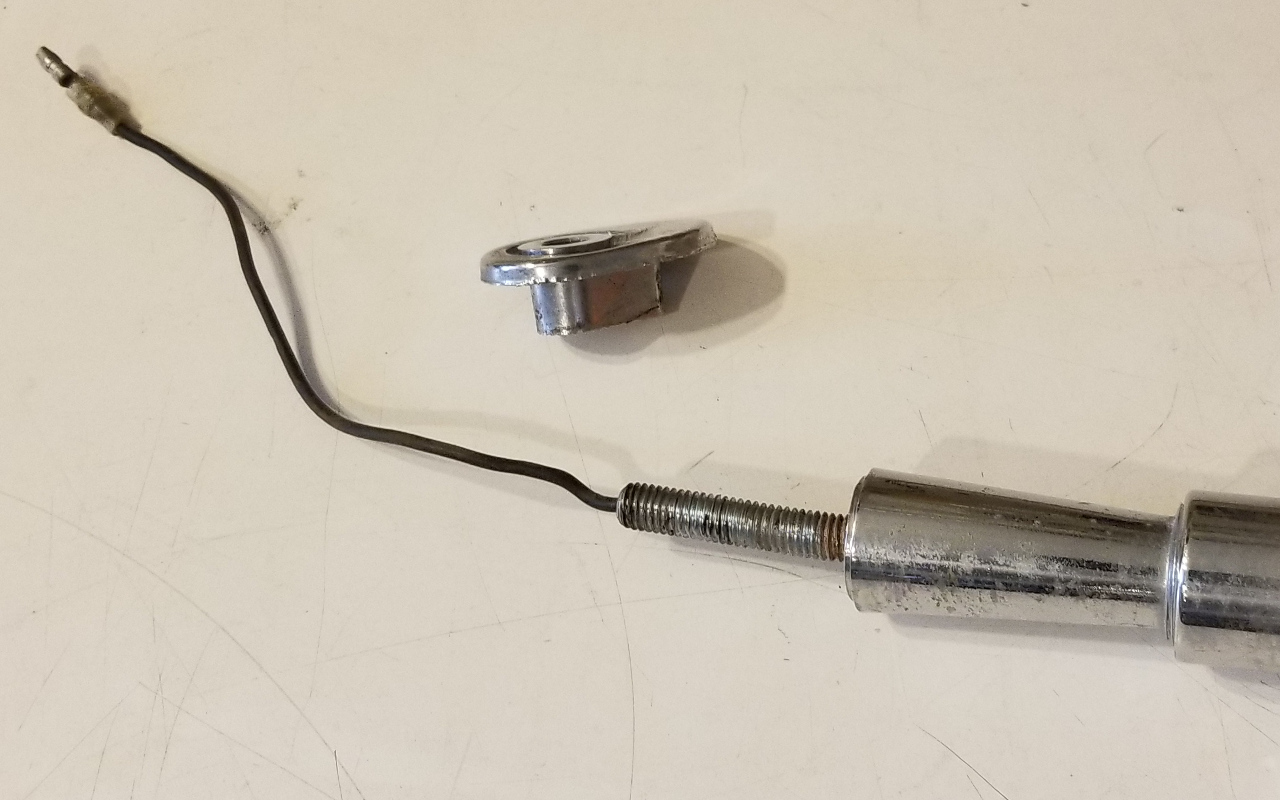 I fixed the warped baseplates (whatever those are called) by putting them in a vise with a flat, smooth piece of cheap metal pressed against the top side to protect the finish. The studs got fixed by the same means as the left rear… I threaded three 13mm nuts onto the studs to protect the thread, then slipped the assembly into an iron pipe and bent it straight. That last one, the left front, had to be readjusted several times because it was bent in two distinct places, and it’s not perfect but I don’t think it shows too much.

Finally, I turned my attention to the faulty blinkers. The right blinkers started working again, mysteriously, but no left blinkers. I rearranged the connections in the headlight so that it would activate the left blinkers if I signaled right, and lo and behold, they worked. Thus, it had to be the switch. I started disassembling the pod and discovered that yes, there is a bad solder joint… two, in fact, one on the left turn side and one on the common connection. The common connection must have been cutting in and out, which explains the intermittent failure of the right turn signals.

I also found this: 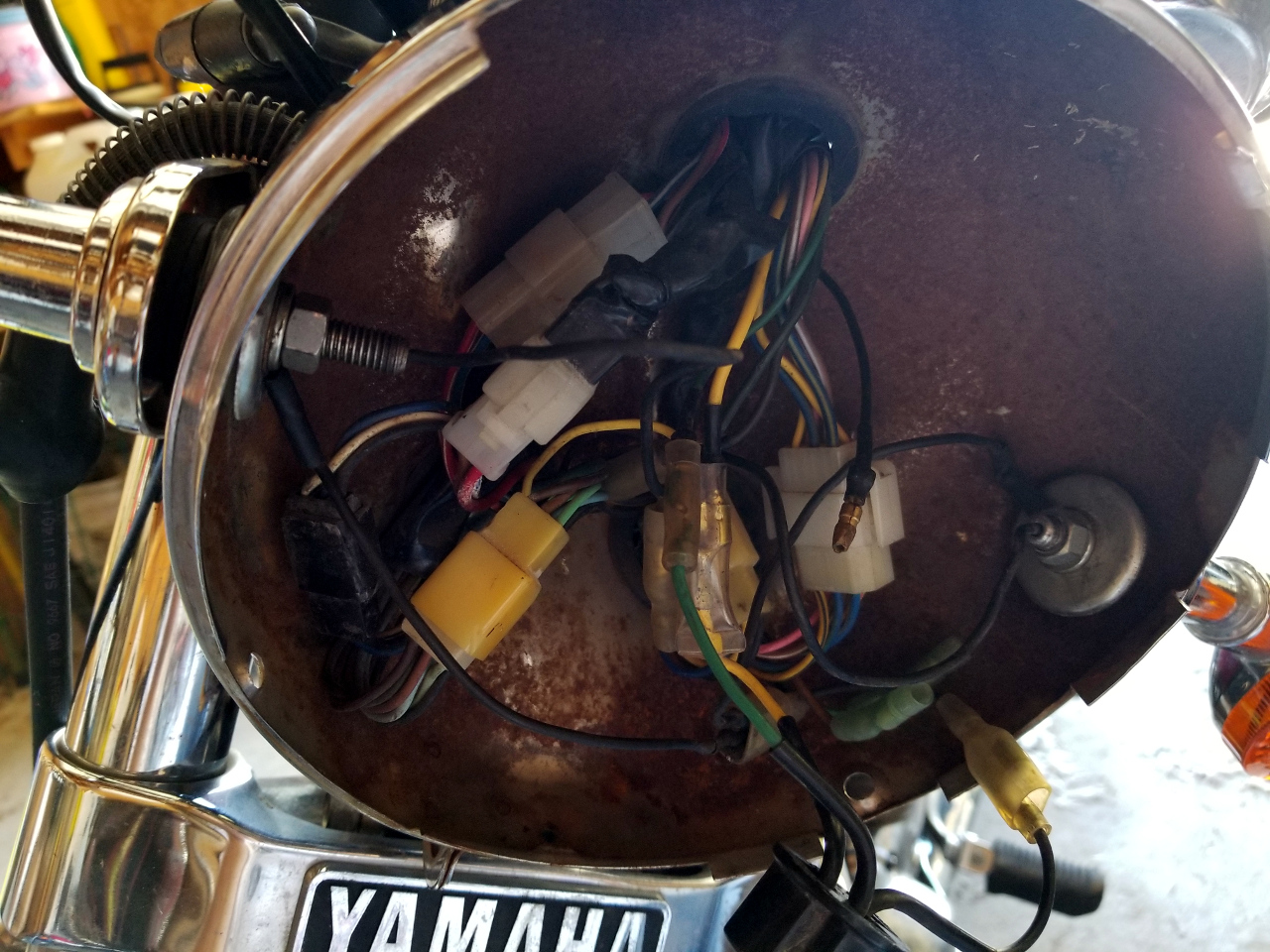 Disassembled the left-side switch pod and discovered that two of the three solder points on the turn signal switch were loose.  That will have to be attended to soon. 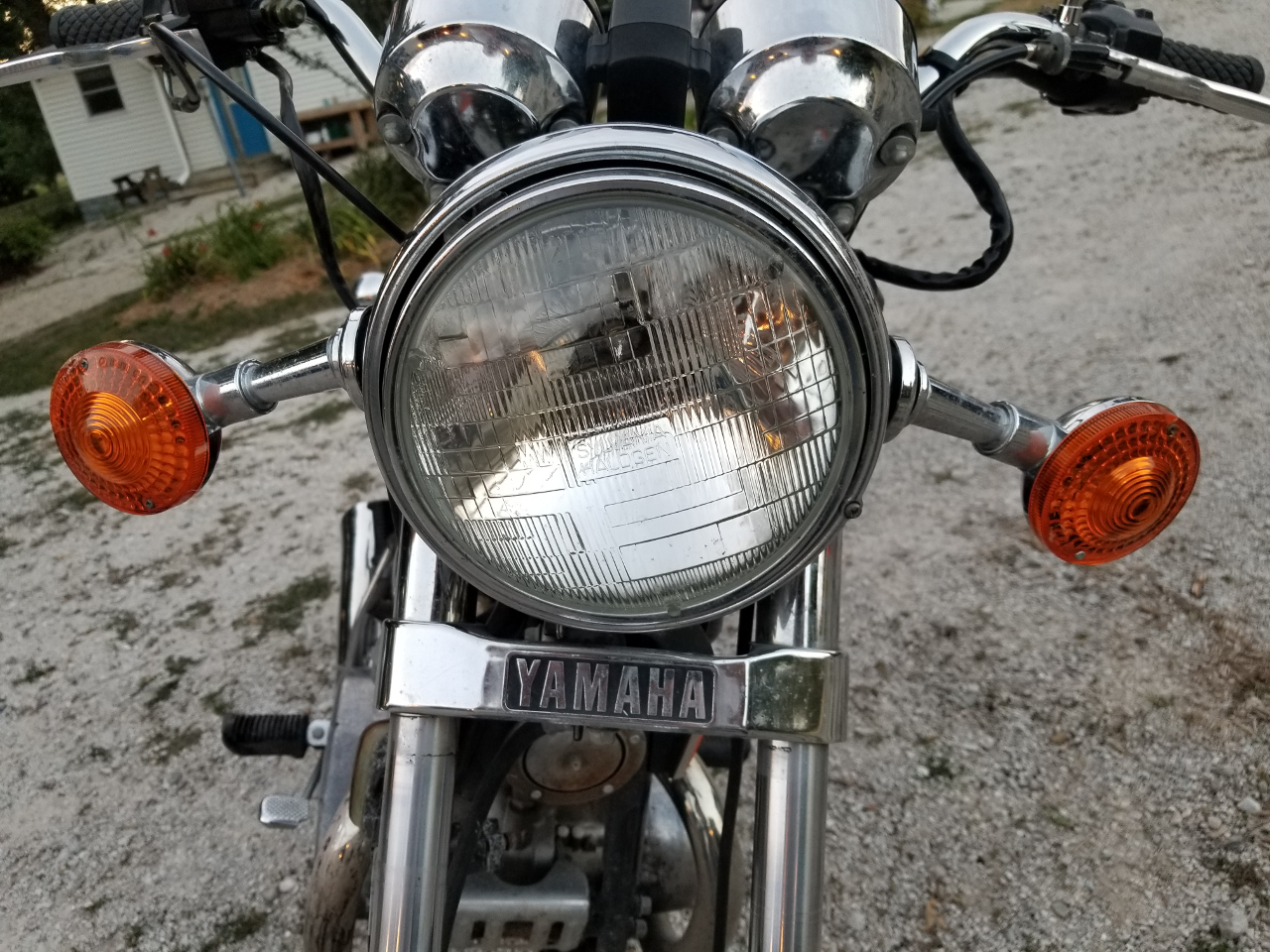 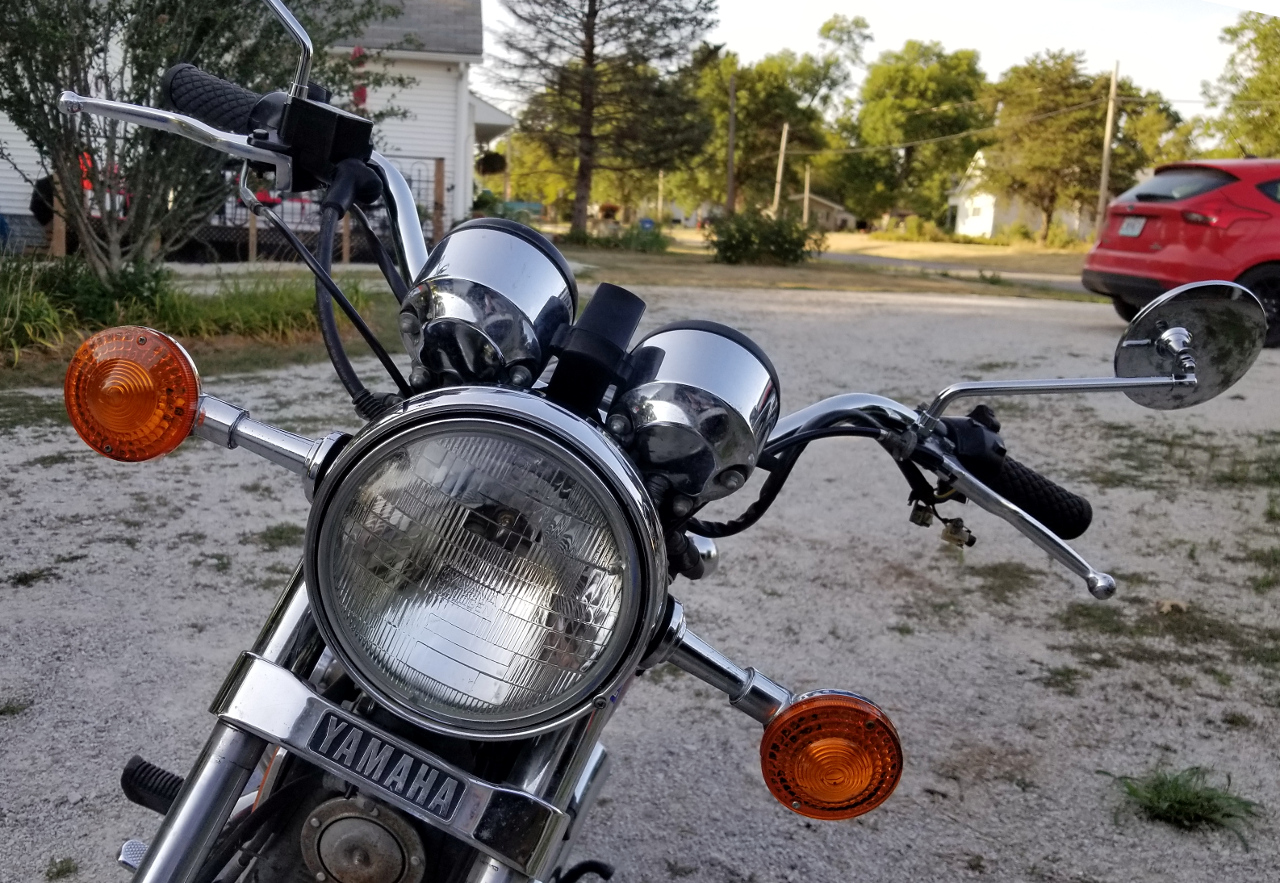 They aren’t perfect, but they are a lot better. I think I can live with it.

Next up will either be the retorquing or the resoldering… next week, I’m sure, as I’m rather busy with non-motorcycle activities this weekend.

I put the new bars together in a “preliminary” fashion: 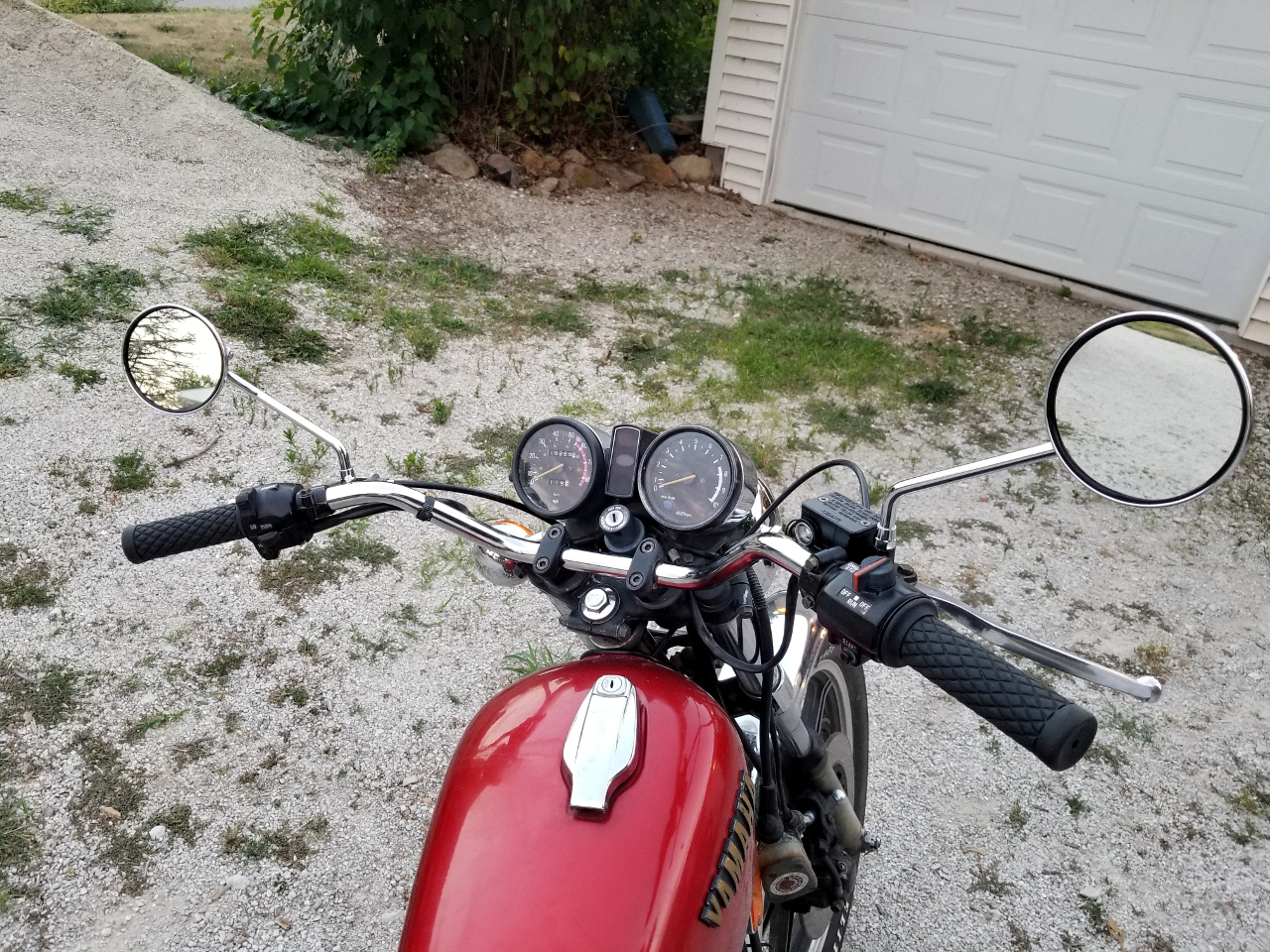 The left side blinkers used to not work… now neither side does. Never disconnected anything, so I’m not sure what went wrong. I haven’t removed the old master cylinder completely, as I need to open up the headlight and sort out the wiring… and of course, remove the tank before actually disconnecting the brake line, to avoid damaging the paint.

I pulled the bent left rear signal, ran three nuts onto the stud, slipped it into a piece of iron pipe and bent it straight. Bent the mounting point (tab? flange?) straight with vice grips, put it all back together and here it is: 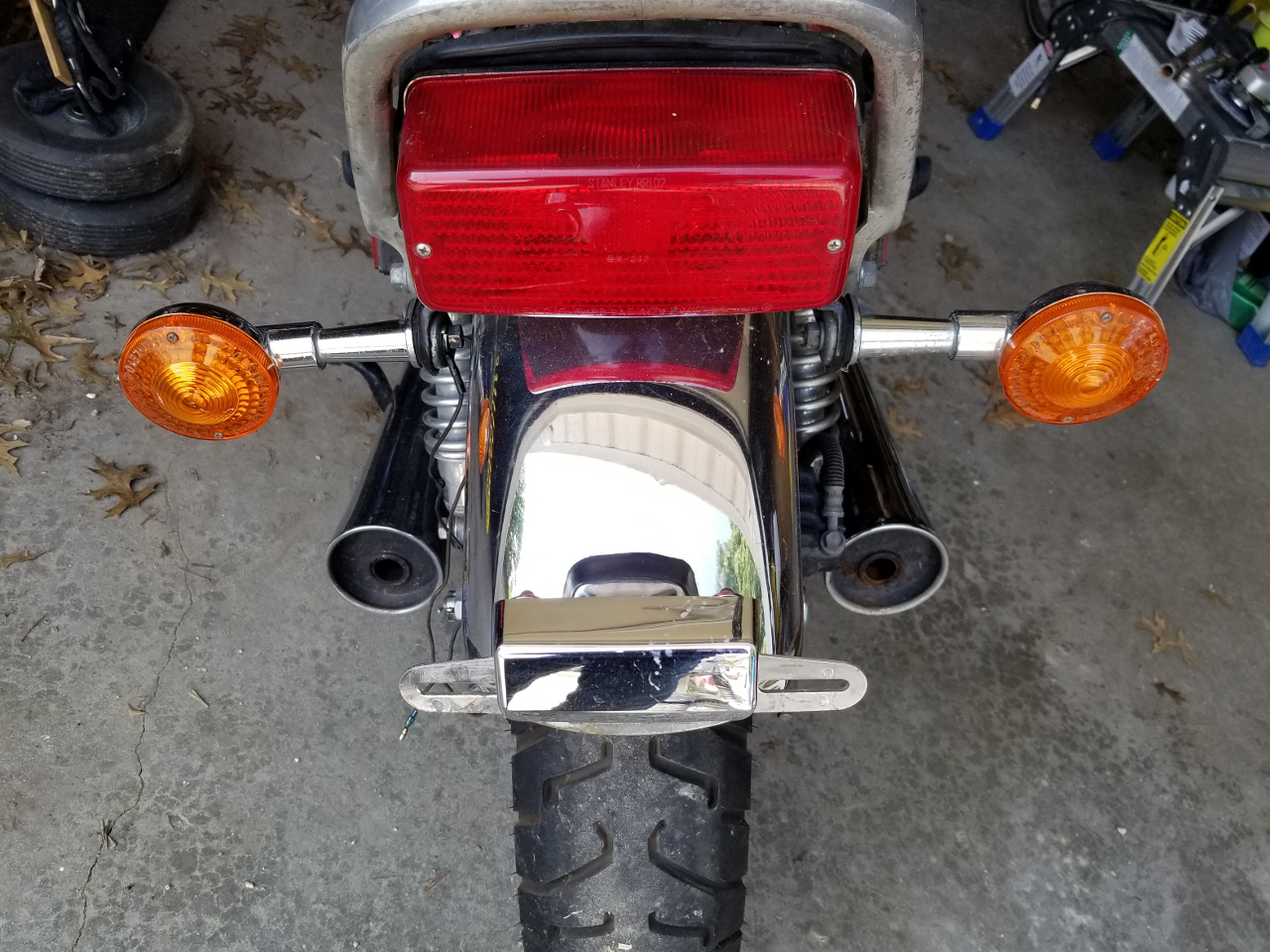 Sorry I don’t have a “before” pic. So now I have to disassemble the headlight to do the same thing to both front signals… and straighten the headlight lens while I’m in there. Later.

Next, I carefully threaded the new left mirror into the damaged clutch perch threads. I think it’s going to be okay. The new master cylinder has a silver-colored lever, so I pulled the stock black lever from the clutch and put on the one from my TW200, which isn’t a perfect match but it is close. 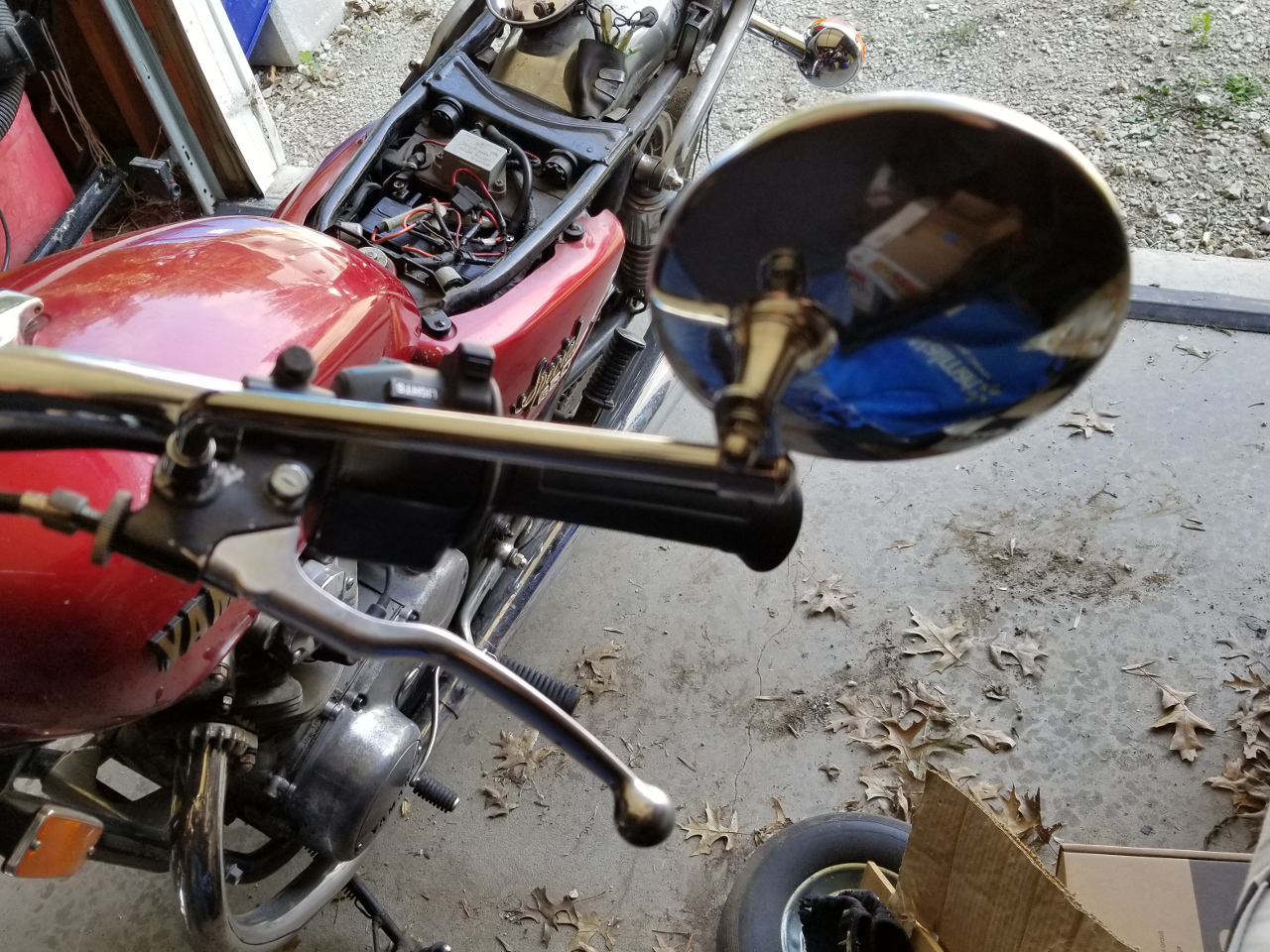 The TW got a set of shorties a long time back, and as we all do, I threw the old ones on a shelf in case I ever needed them.

The master cylinder on my XS650 is pretty crappy (leaks, and so disfigured that fixing it seems a waste of time) so I knew I was going to order another “generic” unit like I put on my 1980 Honda CB650. But that MC won’t work on the pullback Special bars, and I don’t like them anyway. So I posted this thread: http://www.xs650.com/threads/styling-question-probably-a-stupid-one.52557/

I’m not going to quote it all, just the bits I actually did; you can read the original thread if you care. I ordered a bunch of parts from eBay using a one-day-only $25.00 coupon, and here they are: 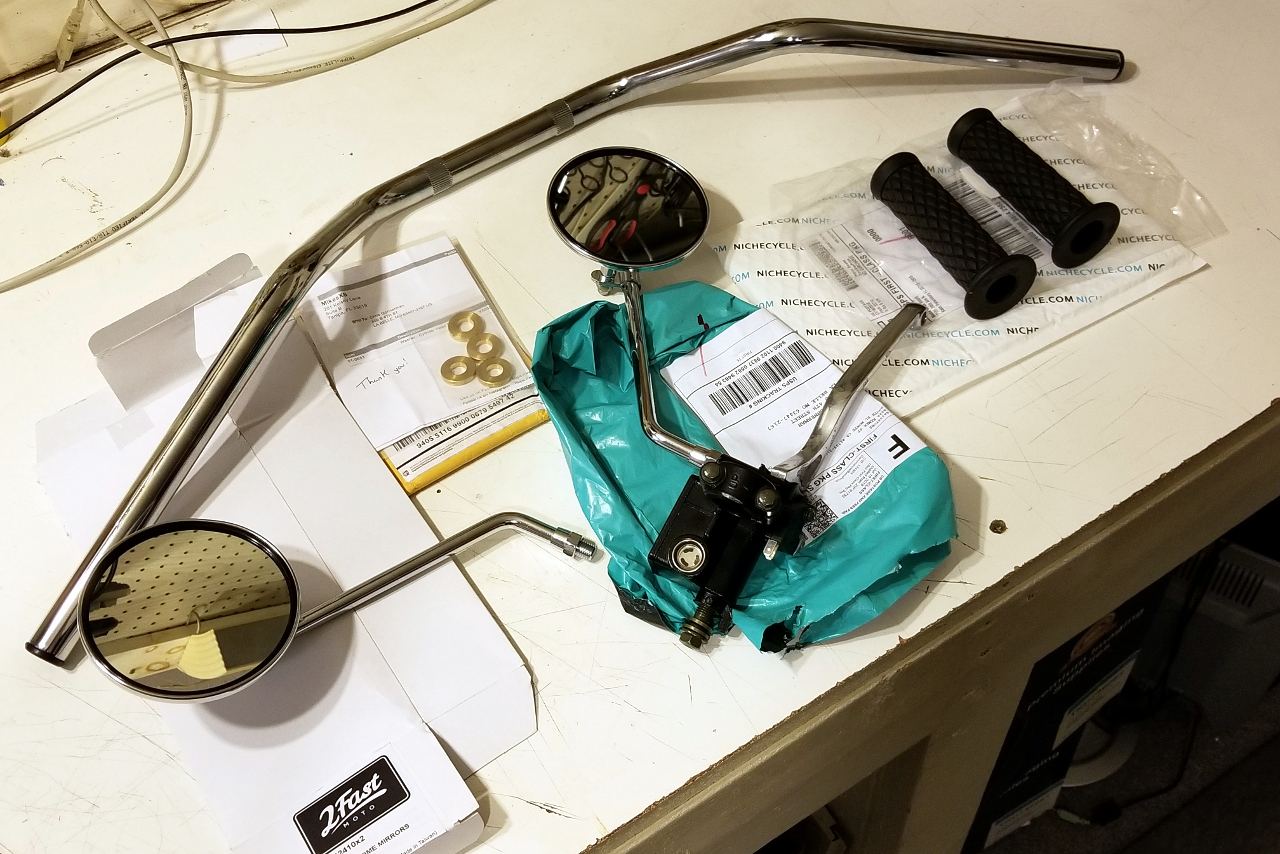 I held them up over the stock bars on my Yamaha TW200; they are the same width, approximately, but angled differently, and I’m wondering if I can find bars like that which are not chromed because they’d be perfect on the TW.

Plan of attack going forward: Pull the tank, retorque the head (installing the new washers as I go), install new bars and attendant bits, connect, fill, and bleed the new master cylinder, and then (and only then) put the tank back on. This still leaves the bent signals to fix, and the left turn signals don’t blink as of right now so I have to figure that out yet.

Do all that, and if the oil leak is at least slowed, get it inspected and some plates on it. Gah. Lots to do… 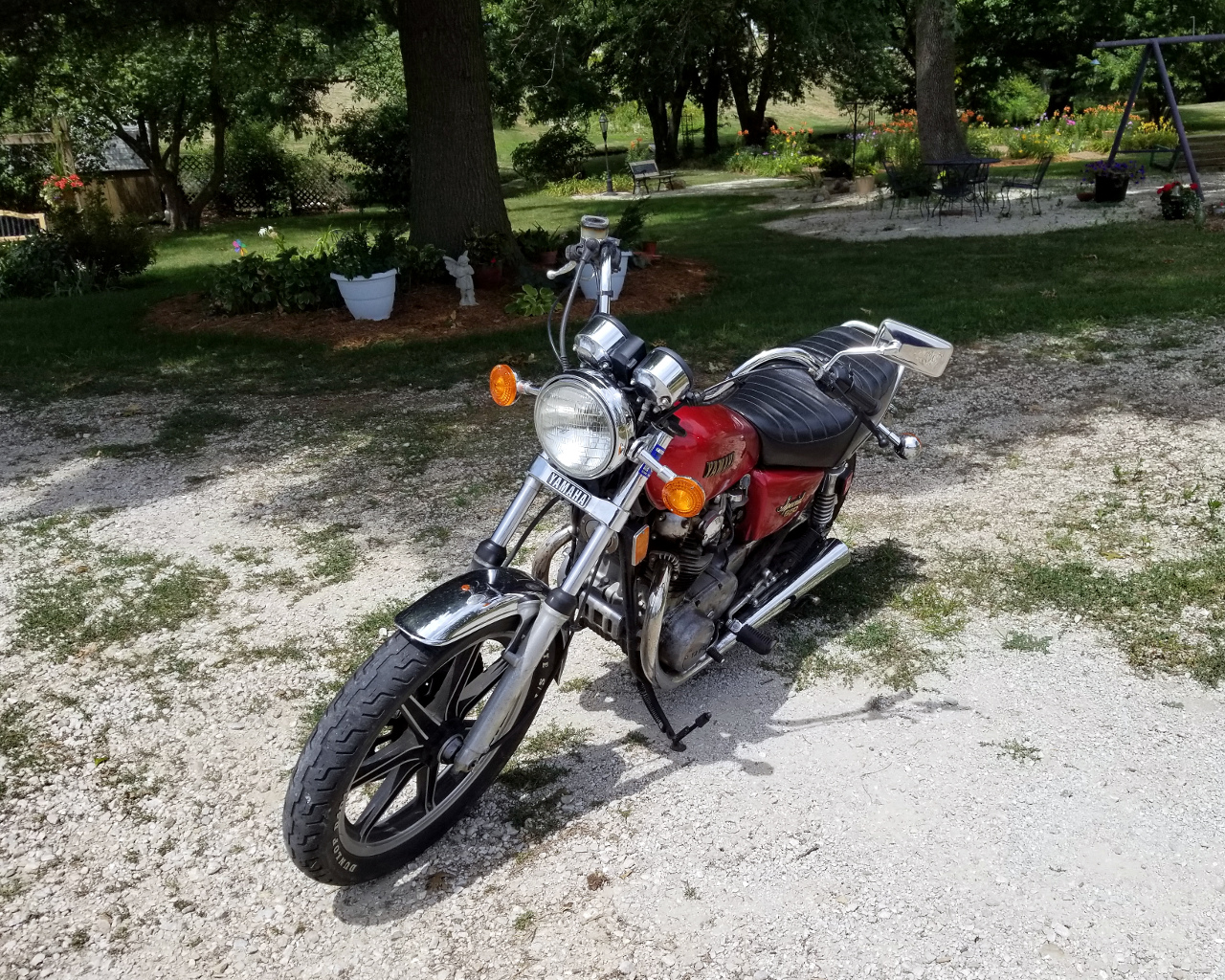 Here’s the instrument cluster, for reference. I rode the bike less than a mile from the seller’s residence to the gas station and reset the tripmeter when I filled it up, but I must have screwed up because it’s only 15 or so miles from where I bought it to my home. 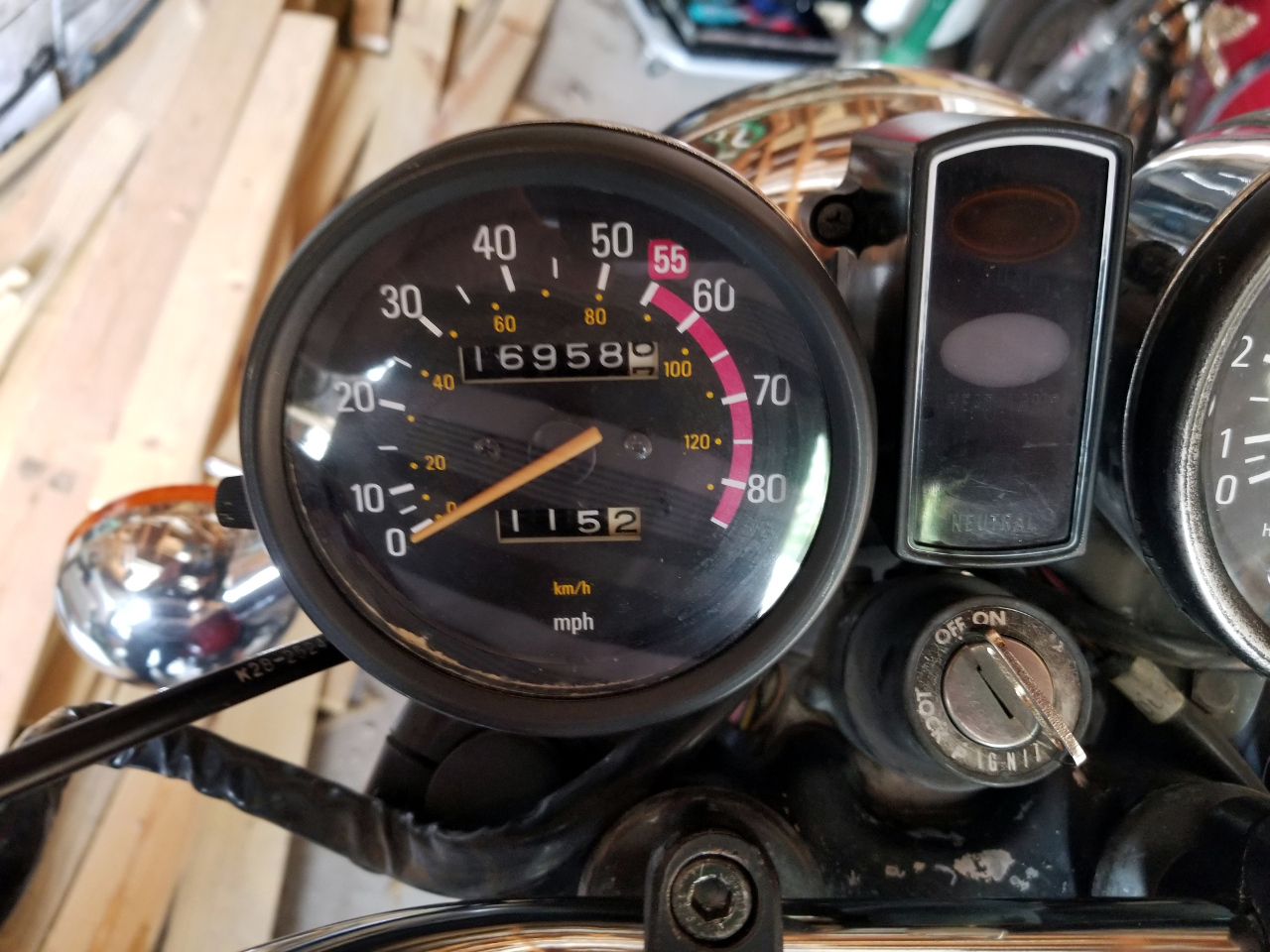 She has a head gasket oil leak the seller said was very minor that I’m not so sure about… it worries me. Needs a new front brake master cylinder, something I’m pretty comfortable doing, and three out of four turn signals are mangled. Seller claimed it was from a static fall, and there is no road rash on the damaged signals, supporting his contention… but if that is so, how did a fall on the left side damage the right front signal? Ah, the questions of life.

Took off the mirrors, and put the left one back on… because the left mirror was attached to the right side of the handlebar on a clamp, and the right mirror was crossthreaded into the mount on the left side. You all know that Yamaha bikes have left-handed right mirrors, but apparently the previous owner didn’t. Gah. The collar nut is missing from the right-hand mirror, so I couldn’t remount it, but after running a bolt through the left-hand mount from the bottom to straighten the threads, that mirror went on fine.

Removed the expired license plate from the bike.

Loosened one of the bent signals to examine it. The flange it attaches to is also bent, but I don’t expect any trouble bending it back out. Haven’t dug into the headlight to remove the front signals for examination as yet… hoping the headlight bucket and mount is undamaged.

This is an ongoing project; look for more shortly!