I finished the touch-up work on the new blinkers today.  I used a couple more of those 19-10-19 spacers from aluminumspacers.com, which I previously used on the headlight, to space the blinkers out a bit further as well, and I think they worked out great! I also strapped that Corona bag on to see how it looks, and how it fits.  The bag is a bit limp when empty, so I stuffed in an XL sweatshirt and it filled it up pretty much completely… which not only made it photograph nicely, it also tells me what I can expect the bag to hold. It won’t be on the bike day-to-day; I think it will be more a special occasion item. Looks quite vintage, doesn’t it?  I just wish I could figure out how old it actually is.

I was wandering the countryside with my wife when I chanced to enter an antique-type shop in Brookfield, Missouri and saw this beauty: Of course, I bought it. According to the broken English inside the flier, it originally came with a shoulder strap, which is absent, as is the key (though as it was a 60’s or 70’s era luggage key, it won’t be hard to find a substitute if I want one). It’s in like-new condition, with a smell that speaks of old vinyl and nothing else, no garage smell or barn stink or even the fragrance of an attic. The material feels like the cover of a particularly soft basketball, less nubbly but just as thick and substantial feeling. The straps were meant to be cut to length and the hooks and loops attached with judicious application of a hammer; the original owner has already done the job, so I can only assume this bag was actually used at least once.

I haven’t tried it yet, but I think the straps are long enough to fit my ’80 CB650’s tank. I hope so, anyway. One strap is cut shorter than the other, so the original owner’s tank was tapered in 70’s style rather than brick-shaped like the Japanese bikes of the ’60’s; this gives me some hope that it will fit my Honda.

Anyway, I just had to post about this… it’s such a nice piece, and I feel lucky to lay my hands on it.

… so tonight I got home and did some research.  It appears this bag is still made, and has been in production for a long time.  First let me say, wow.  I have no way to know how old this particular bag is… there are no dates whatsoever on the flier or tag.  Google found very few images that look like this, and almost all of them lead to this page:

I can’t read Japanese, but Google sort of can, so I ran it through their translator.  Still didn’t learn much.  The pictures on that page have dates under them, all in 2009 apparently, and the descriptions for some of the bags make it appear that they are still being made and that this site has some that are custom made for them.

One item of note to me is that the photos (all of them) in the flier that I got with the bag all depict motorcycles from the ’60’s or very early ’70’s.  I can’t believe that any current unit still comes with the vintage paperwork.  Also found another bag for sale on ebay (actually already sold) where the seller says his uncle bought it in the 1970’s.

It mentions the clear map holder, which one of the models shown in the flier I got does have, making the two bags contemporaries.  It gives me some hope that this is a vintage unit.

Even if it isn’t, those bags on aldana.jp?  The price is more than 3x what I paid.  So I still got a bargain.

As I mentioned in my last post, I decided I needed to rebuild my master cylinder.  I ordered the K&S rebuild kit, got a bottle of DOT 3 fluid and some clear hose, and one fine day I set out to do the rebuild.

First problem… the snap ring is so rusty that I cannot get it out.  In trying, I also discovered that my snap ring pliers don’t quite reach all the way down there (I would have sworn they would work).  And also, I discovered that there is this big O-ring at the base of the plastic reservoir that needs to be replaced, and which is not in the rebuild kit, nor in stock anywhere locally.

I got it halfway apart and couldn’t properly put it back together.  I tried, of course, but the fluid wouldn’t stay in the reservoir because of that O-ring.  Gah.

SO I ordered a new set of snap ring pliers from Amazon, one that a reviewer specifically said he used on the master cylinder of an early ’80’s Honda.  While I waited for them to come in, I tried to get the O-ring, but as I just said, nobody had one.  Then while doing the research I discovered that you can get generic master cylinders online.  I started out looking at Amazon.com, but ended up buying one from an ebay seller instead.  I viewed it as a temporary solution… I would still get that damn O-ring and rebuild the original master cylinder.

Once I put it on, bled the brake, and took a ride, I changed my mind.  It’s quite good.  The only issue, if you can call it that, are the markings on the sight glass… both upper and lower marks are labeled “LOWER.”  I can live with that.

I will still probably rebuild the original sometime, but there is no longer any hurry.

That would be the end, if I had any sense, but since I don’t, let’s move on…

I got an email from denniskirk.com telling me to check out their clearance items, so I did.  I do that a lot anyway, hardly ever buy anything but I like to see what’s out there.  Well, this time I found something I liked: a set of K&S Chrome LED “marker lights” (i.e. turn signals without DOT approval… in Missouri, I do not expect a problem running them as signals).  They were marked WAY down, and they look more like the original stock signals than the black rubbery ones I had on the bike.  So I ordered a pair.

They look and work NICE.  Much better than the ones I had on before, in that they are brighter than the ones I previously used AND they are “dual filament” (not really, but they do a good job pretending to be) so they are always-on lights until you flip on the blinker.  In case the link above quits working, here’s a picture: 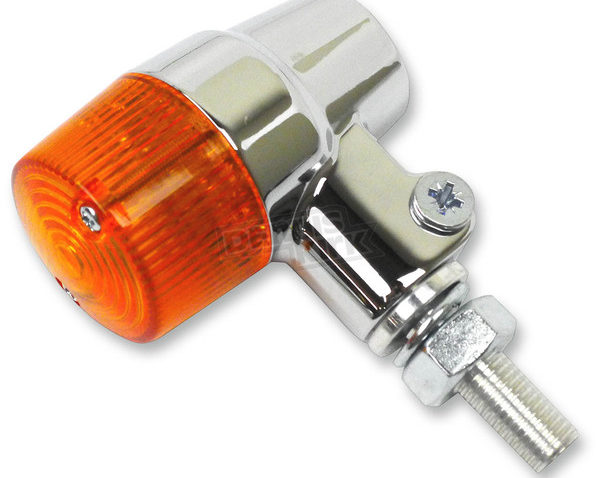 Notice that set-screw?  It allows you to turn the signal (i.e. to aim it) after getting the stem tight.  This is GREAT, except that the screw is just barely long enough… and I stripped one out tightening it.  It barely engaged the threads before pulling out, so I ran in another longer screw and it went in fine.  But it was TOO long.  I needed a screw longer than the stock unit, but shorter than what I had in my toolbox.  Gah, again.

Stopped by Fastenal, thinking they’d have what I need, even though the last three times they haven’t.  Well, they didn’t this time either.  I wanted a panhead screw in a zinc or chrome finish, and they did not have them.

Home Depot did, so I’m in business.  But I’m less and less impressed with Fastenal all the time.