Late last week I took the bike to get it inspected, and it failed… busted taillight, which I had not realized was bad enough to fail. Looking online, I found NOS lenses for $45.00. Seemed a bit high… instead, I ordered an entire taillight, not just the lens, for $26.00 including shipping on Ebay. This morning it passed inspection, and is now wearing a legal Missouri plate.

While riding it to and from the auto repair establishment where I got it inspected, I noticed the bike stumbled rather badly whenever I opened the throttle at highway speed (5000 RPM is about 55 MPH, and that’s where I noticed it). I remembered seeing that the 1980 CB650 had a service bulletin, so I actually read it. Seems that some CB650s from that year had exactly that problem, and the fix from Honda was a part set that rerouted the float bowl vents to the airbox cover. The part number for that set is 17225-460-670, and just this moment there is a guy on Ebay selling such a kit for $60.00:

I’m too cheap for that. I stopped by the auto parts store and picked up some vacuum hose and a tee that looked pretty close to what is pictured, then drilled a hole in the airbox cover that is just a bit tight on the hose I bought. It’s not perfect, but it did improve the bike’s performance; before, if my hand twitched on the throttle, the bike would stumble, but now I have to roll it on more to get the stumble and it lasts a shorter period. May break down and buy the “right” part at some point… dunno. It’s definitely serviceable as is.

I have noticed that it’s not hard to hit a “false neutral” when upshifting. I’m learning to shift with more authority.

One thing that now puzzles me. I’ve been making the mistake all along that the CB650 came in a standard version which was not “cruiser” styled, and a Custom version that was. I see now that I was mistaken… both models have the same cruiser seating position, but the Custom has some nicer amenities (and Comstar wheels, which may or may not be “nicer” depending on whether or not you like those). The puzzlement comes from those dang engine guards… how could anyone ever want them on the bike, when they obstruct the foot controls? But the original owner of this bike obviously liked them.

HOKAY DOKAY. So. Today I received the last items I needed to finish the job, and here it is: 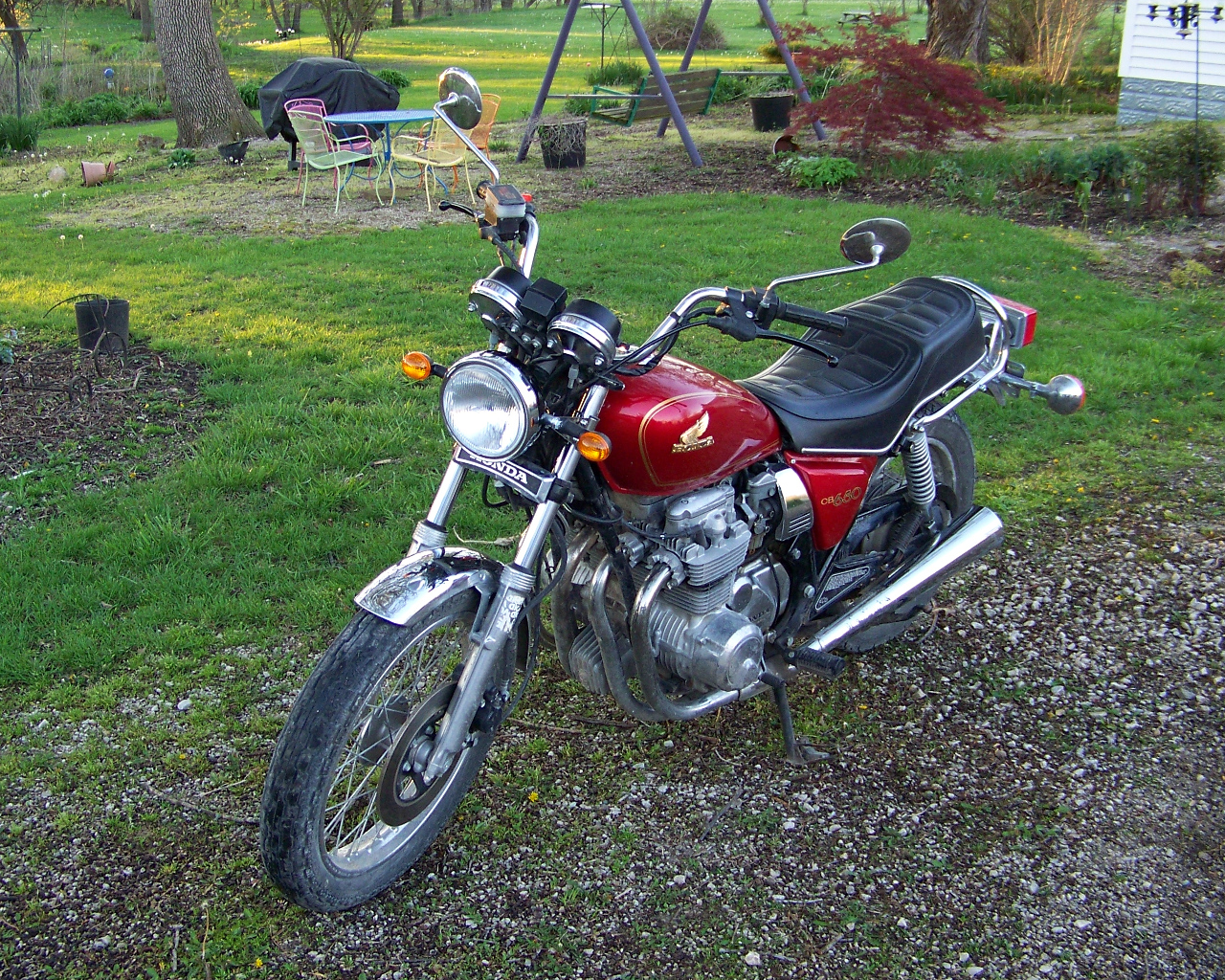 Here’s another look at the headlight and signals, close up: 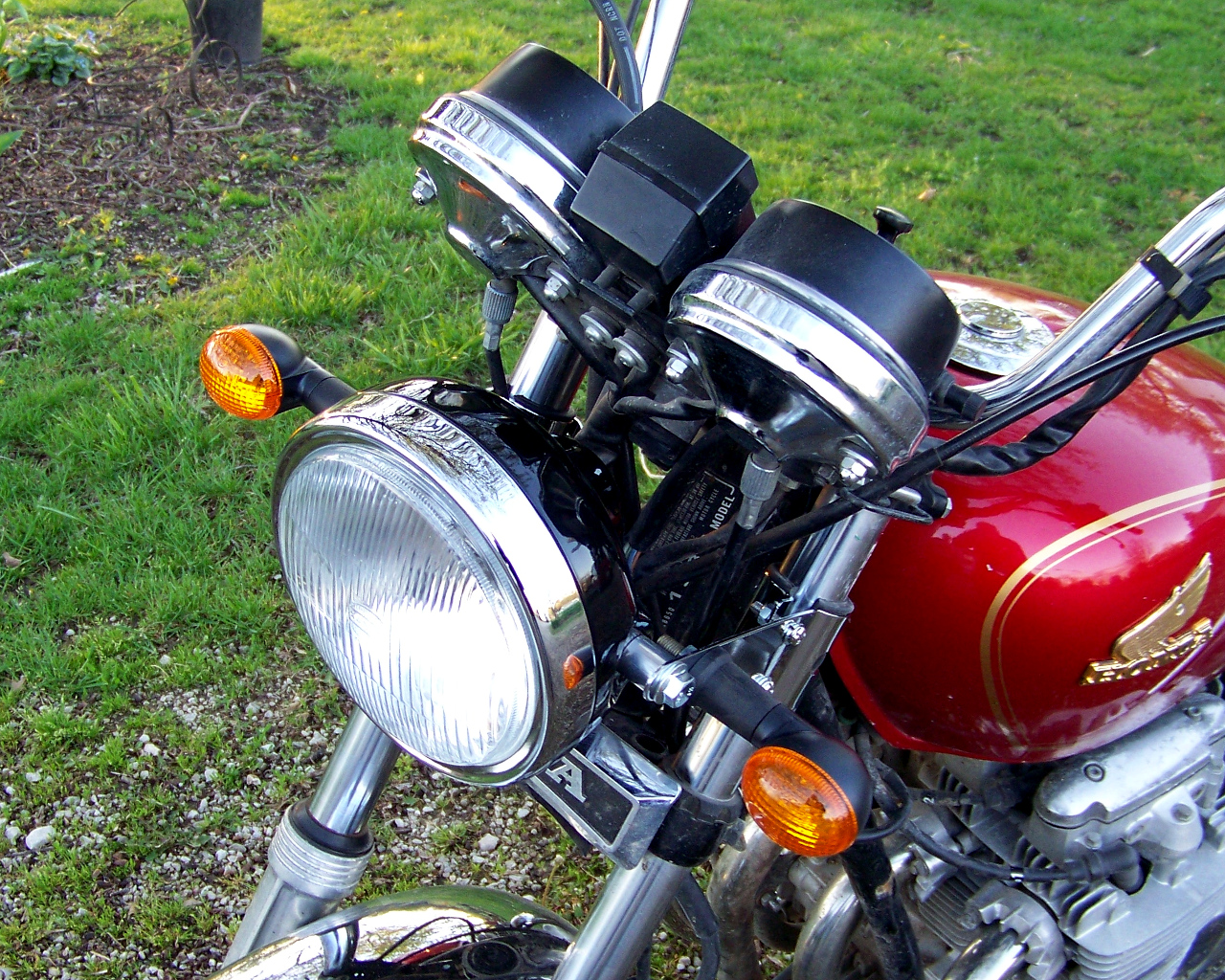 In the credit-where-credit-is-due department, I have to give a big THANKS to Speed Moto Co. That’s their headlight, headlight mounting brackets, and signals. Specifically, here are the items we used:

It probably would have been easier to get a headlight that had 7″ mounting points, but I think I’d have needed spacers anyway, just less length. And this is a really nice looking headlight, in my opinion… it does not look a bit cheap.

As I noted before, I got my spacers from aluminumspacers.com. If you visit their site, it looks like they only sell SAE parts, but actually there are metric parts mixed in with the nearest sizes of standard spacers… if I had not already found myself in the “ready to settle for less than perfect” situation, I might never have seen that they had the right thing. In fact, it’s probably why it took me so long to find a good source. And this is a company that makes the parts in the US. Admittedly, they’re just aluminum tubes, but still. I got two of the 19mm long, 19mm OD spacers:

See, you can tell from the URL that they are in the 3/8″ hole size category. I don’t think they do themselves any favors, listing their parts the way they do, but the parts themselves are top notch.

The parts we ordered came in a couple of days ago, and I have the headlight mounts and turn signals on the bike. I had a hard time locating spacers that would work with the headlight and brackets, but finally found them at (ahem) aluminumspacers.com. The brackets we got would actually mount a full 8″ headlight on the bike, but we got a 7″ unit that is really, really nice looking; the mounting holes set back and in a bit, enough that you could actually mount the headlight on a bike fitted for a 6.25″ headlight. As I say, though, it’s a really nice unit. I’ll post pics when it’s all together (probably late next week).

I ran into an issue with the turn signals. The replacement units did not say they were LED but they must be… they come on solid, no blinking, both the new front and the stock rear. I suppose I need an electronic flasher unit, which I have installed on other bikes before.

But I’ll admit my stupid here… I can’t find the flasher on the bike. The parts fiche shows it horizontal, but does not show where it goes. I’ve read elsewhere that it should be behind the left side cover, and I found the starter relay there (where I expected to find it) but cannot see the flasher relay. I can HEAR it click (once) when I turn on a signal, but I can’t find the darn thing.

Okay, never mind. I finally realized the only place I couldn’t see or touch was behind the starter relay; pulled it out of its rubber bucket and there was the blinker relay behind it.

Also managed to forget and leave the key on, running down the battery. Gah. Really, I don’t get rid of any stupid, I just move it around from place to place…

Yesterday my daughter spent some time cleaning up the bike, while I set about removing the unwanted parts. I rigged the fairing with a rope sling to the rafters in my garage so I wouldn’t have to try to hold on to it while removing the bolts. It was a good thing, because the mounting frame was bent (and it looks as if it was bent when the fairing was installed, though I’m not 100% sure). After I got that off, I pulled the engine guards.

The original headlight and signals are long gone, of course. Original style replacements aren’t that hard to come by, but after some discussion we decided to go with a look-alike headlight instead along with some fairly nice OEM-like aftermarket signals.

So here it is stripped: 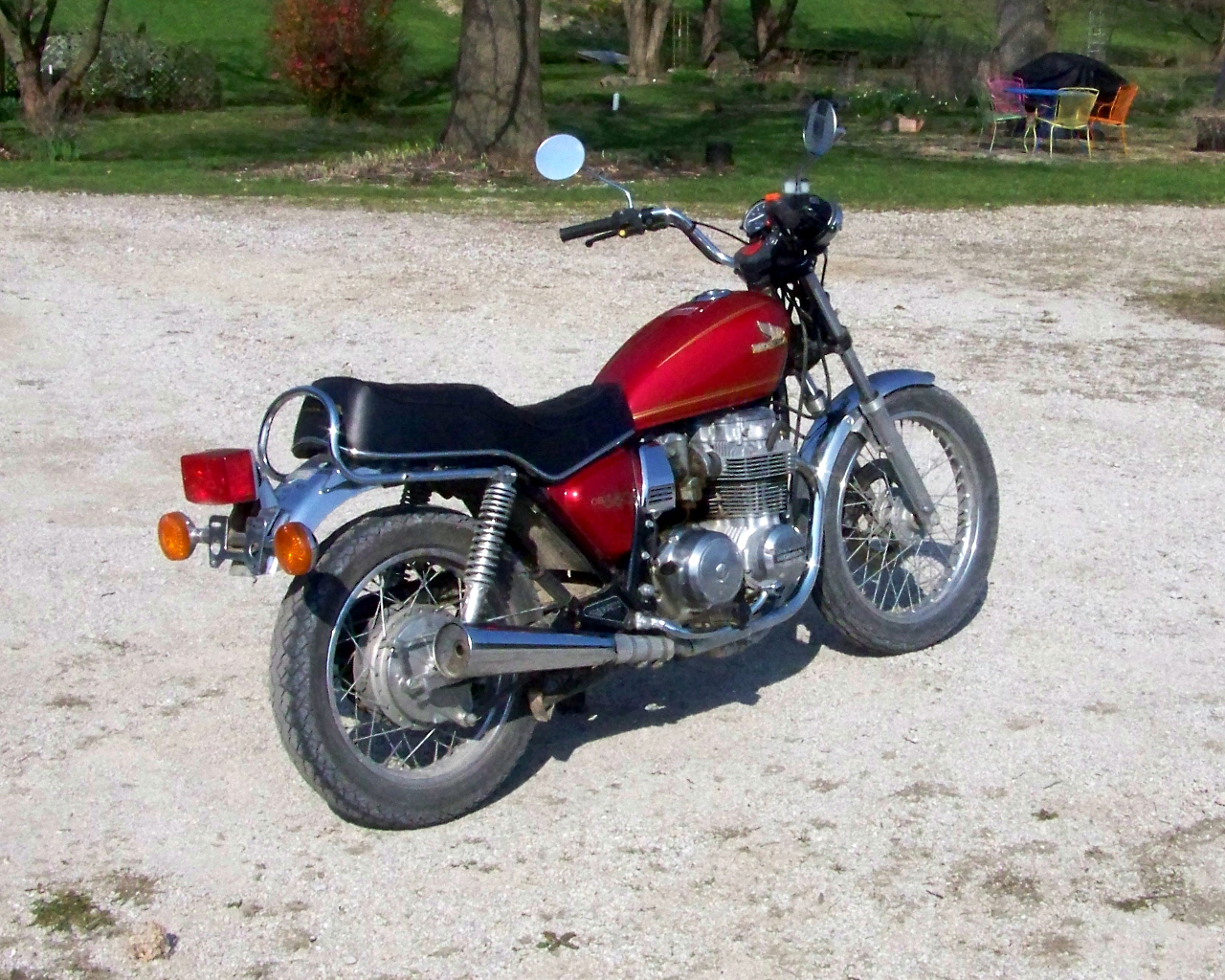 The fairing installation did not, it appears, require cutting any of the stock wiring harness. It all looks pretty good: 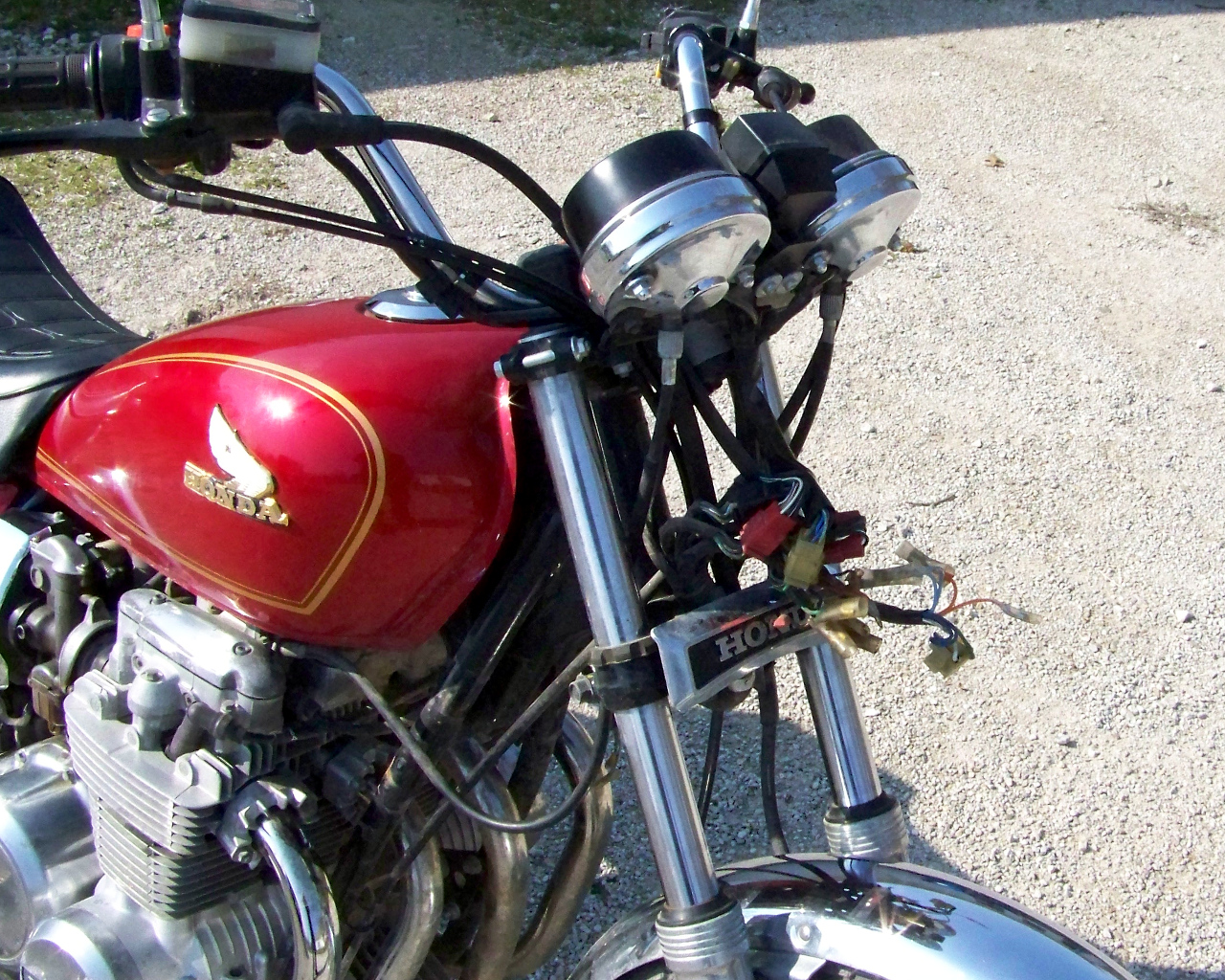 Here are the engine guards. I’m not sure what the deal is with them… they make the bike hard to ride.  I wonder if they were built for some other bike; I seem to recall that this CB650 was based on the the original CB400 four cylinder, which had a more upright seating stance.  I may try to sell them… I’m sure not putting them back on. 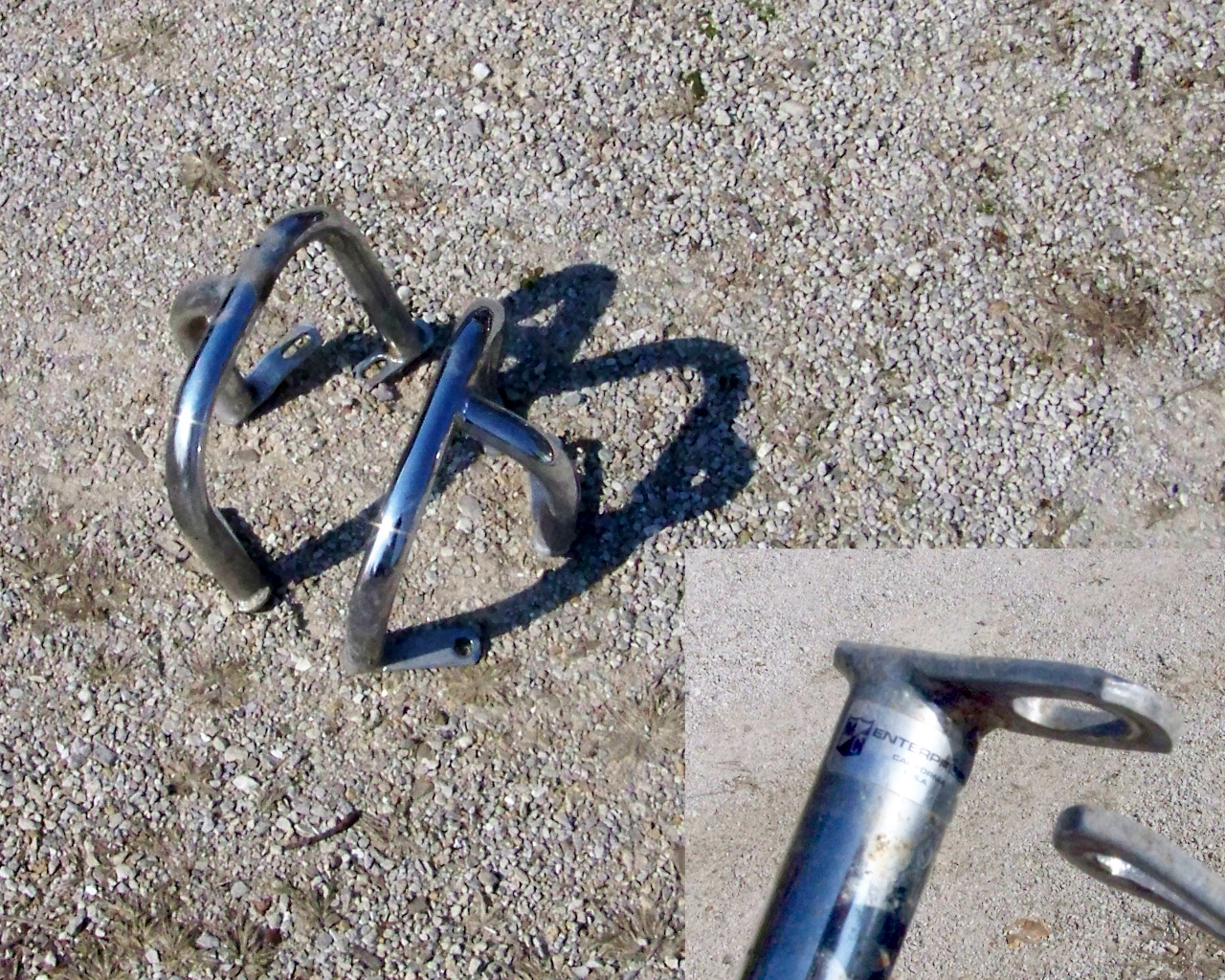 I put fuel system cleaner in the tank, filled it up and ran it some this morning. The treatment was intended for 21 gallons of gas (maximum); I used about a fifth of the bottle. It would probably be safe to use more than that, but I didn’t want to overdo it. The bike seemed to start more easily this morning, but I have no idea why that would be true.

Very little has happened with the Dream since then.  I’ll confess, getting the head apart stymied me long enough that I just sort of stopped working on it.  My wife rolled the chassis to the back of the garage, and pushed the engine (on its dolly) back beside it, and the boxes of parts are all with it, so if I ever get back to it, it’s all together.  I just feel out of my depth, mechanically speaking. 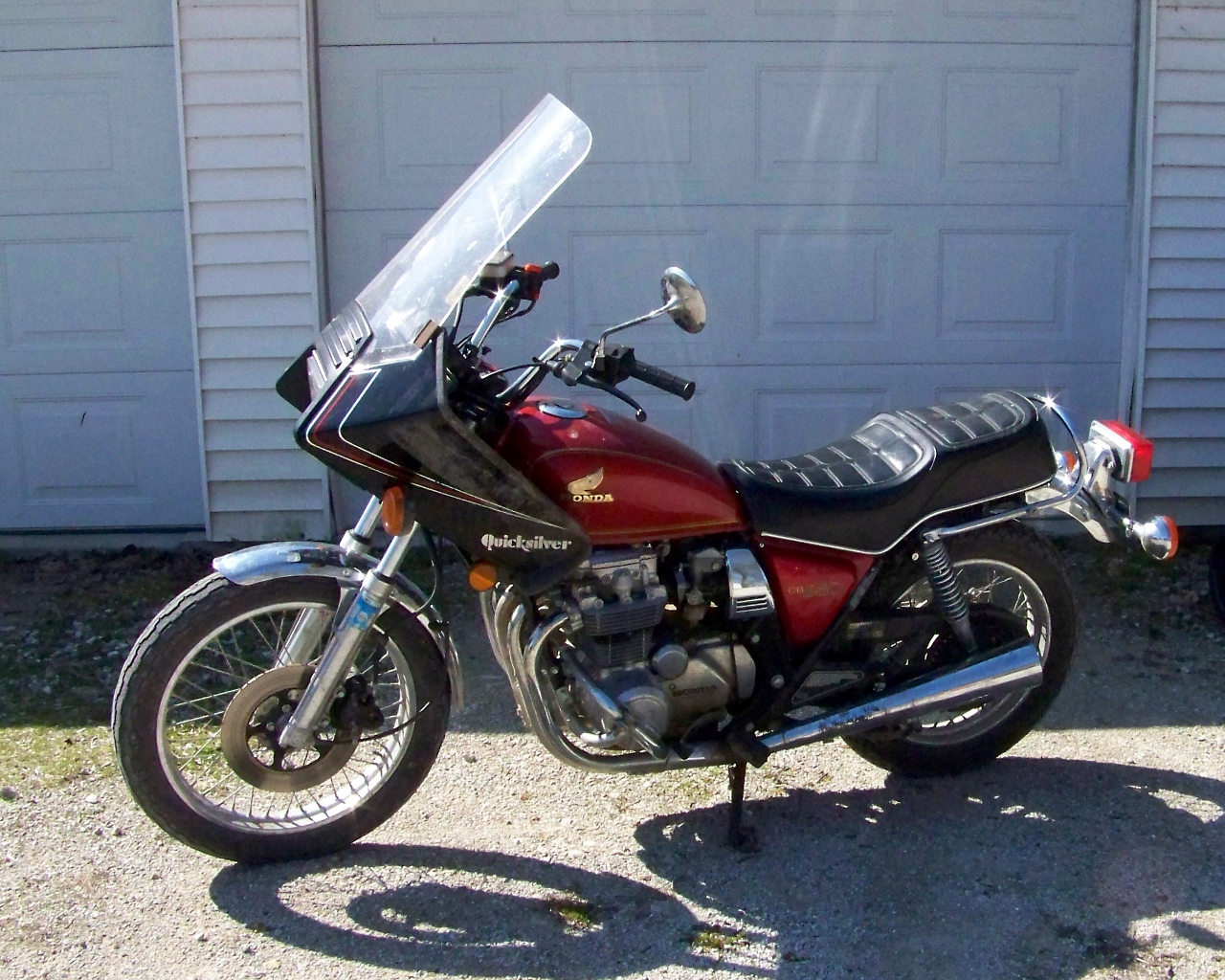 Here’s the other side, with my TW in the background: 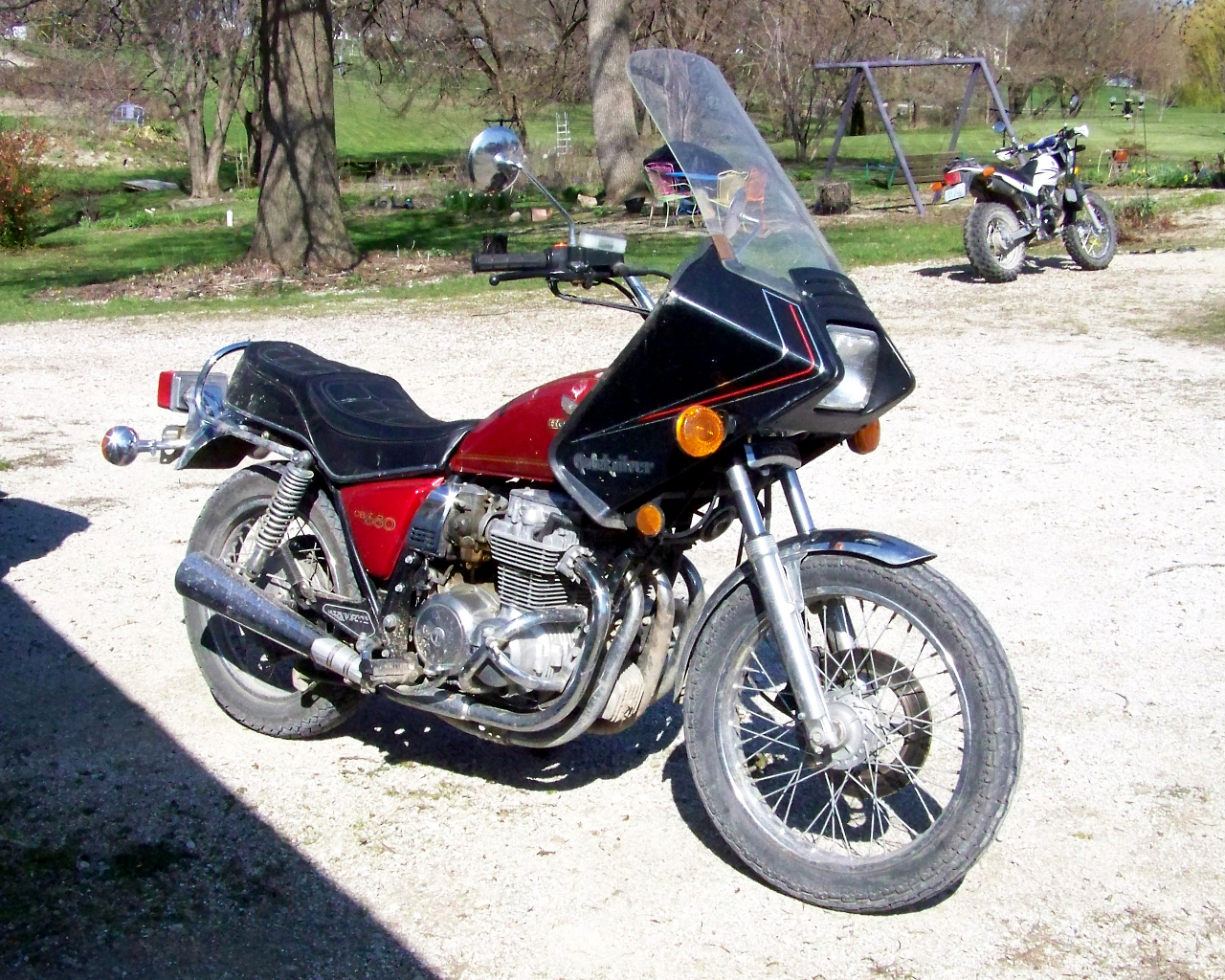 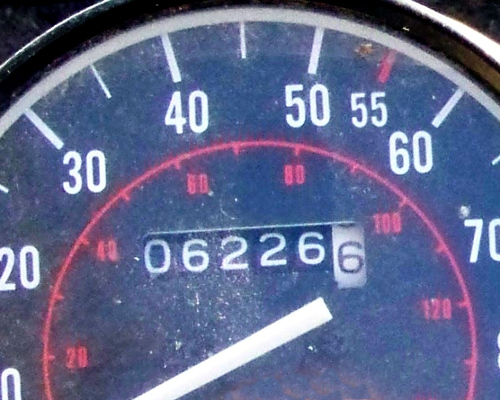 These pictures are all as-we-found-it, incidentally.

The story has it that the original owner bought it new around 1980. The bike had inspection stickers in two places: high up on the left fork tube, hidden by the fairing, and on the lower left fork slider (as you may notice in the first pic). The lower inspection stickers are 1991, so I’m assuming that’s the last year the first owner licensed it.

The original owner, I’m told, bought the bike for himself and his wife, and garaged it after she passed away. The fellow we bought it from acquired it a year or so ago, intending to ride it himself, but he lives on a gravel road; he scared himself rather badly, it seems, but it appears he did not actually drop the bike. The only damage is the broken right front turn signal, and the fairing has a ding and a crack that are consistent (in my opinion) with a garage fall… which the guy we bought it from said happened in a high wind.

As I say, he scared himself, and so decided to sell it. His choice of amount is what he needs to buy a shotgun, he said.

I took a test ride, and yeah, it’s not much fun on gravel. It runs a bit puny at low RPM but revs pretty nicely; I’m suspicious of some gunk in the carbs, and hoping some fuel treatment I added (along with fresh gas) will help.  I don’t relish pulling all four carbs and cleaning them.

The modifications were our main issues right now, though. There was a back rest on the bike when the last guy bought it, and he removed it; the bolts for the back rest are longer than the original grab bar bolts, so he did this: 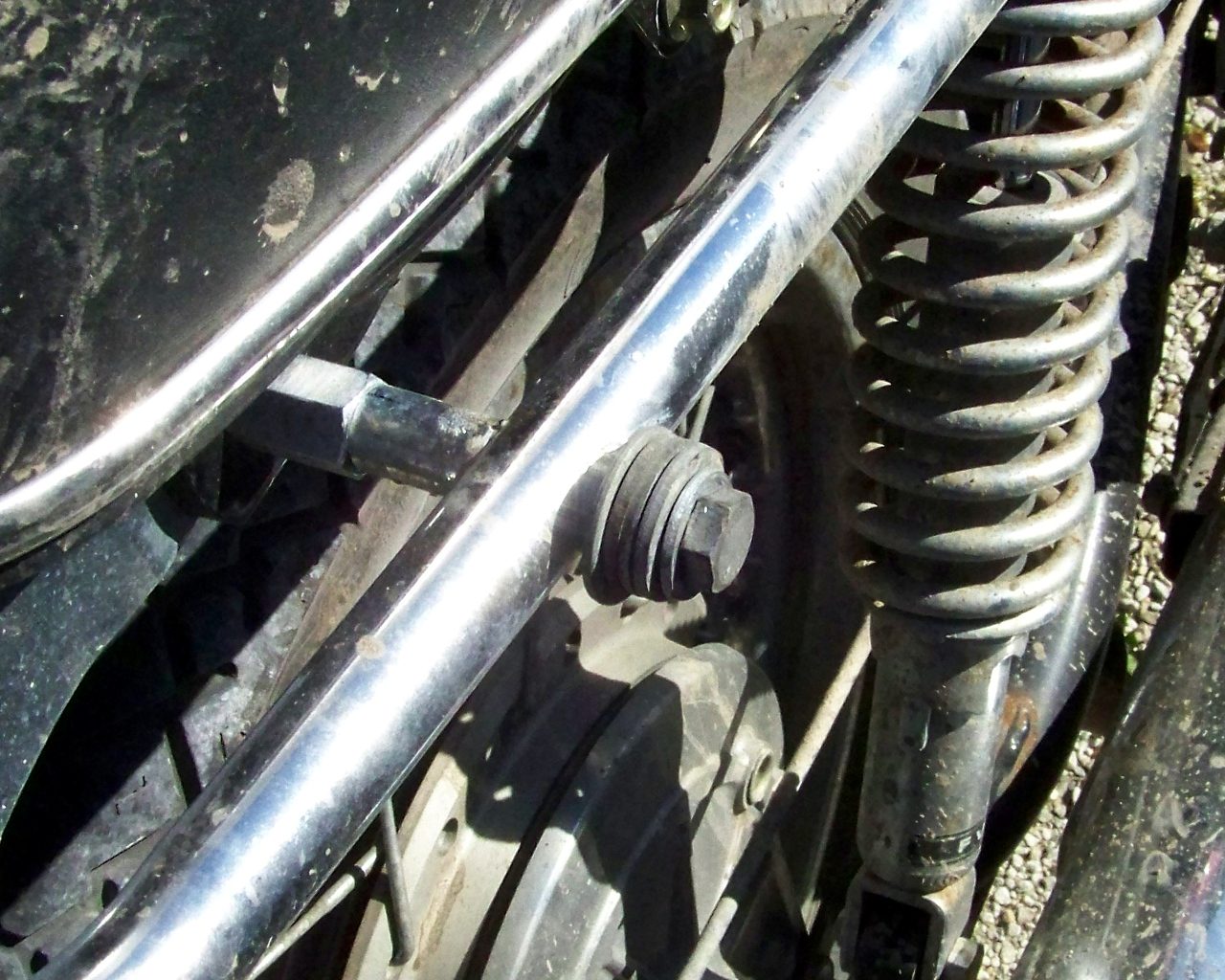 I know hex heads were standard, but I replaced them with Phillips heads instead so they don’t snag on my passenger’s clothing.  I would have liked to use Allen heads instead, but had difficulty sourcing the correct type in a bright finish (black was easy, but would have looked strange).

Then there were the engine guards, which were pure evil. Just try to shift: 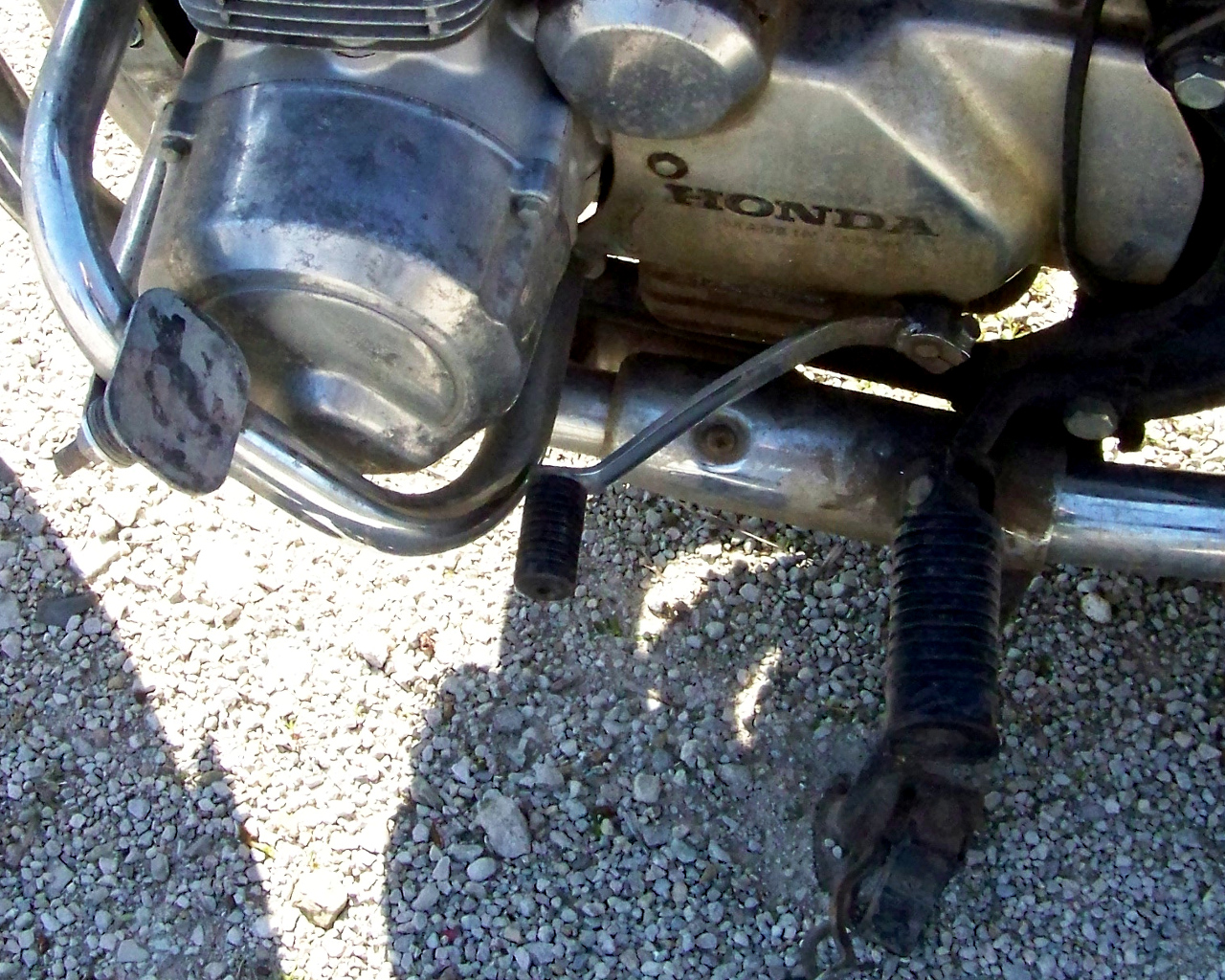 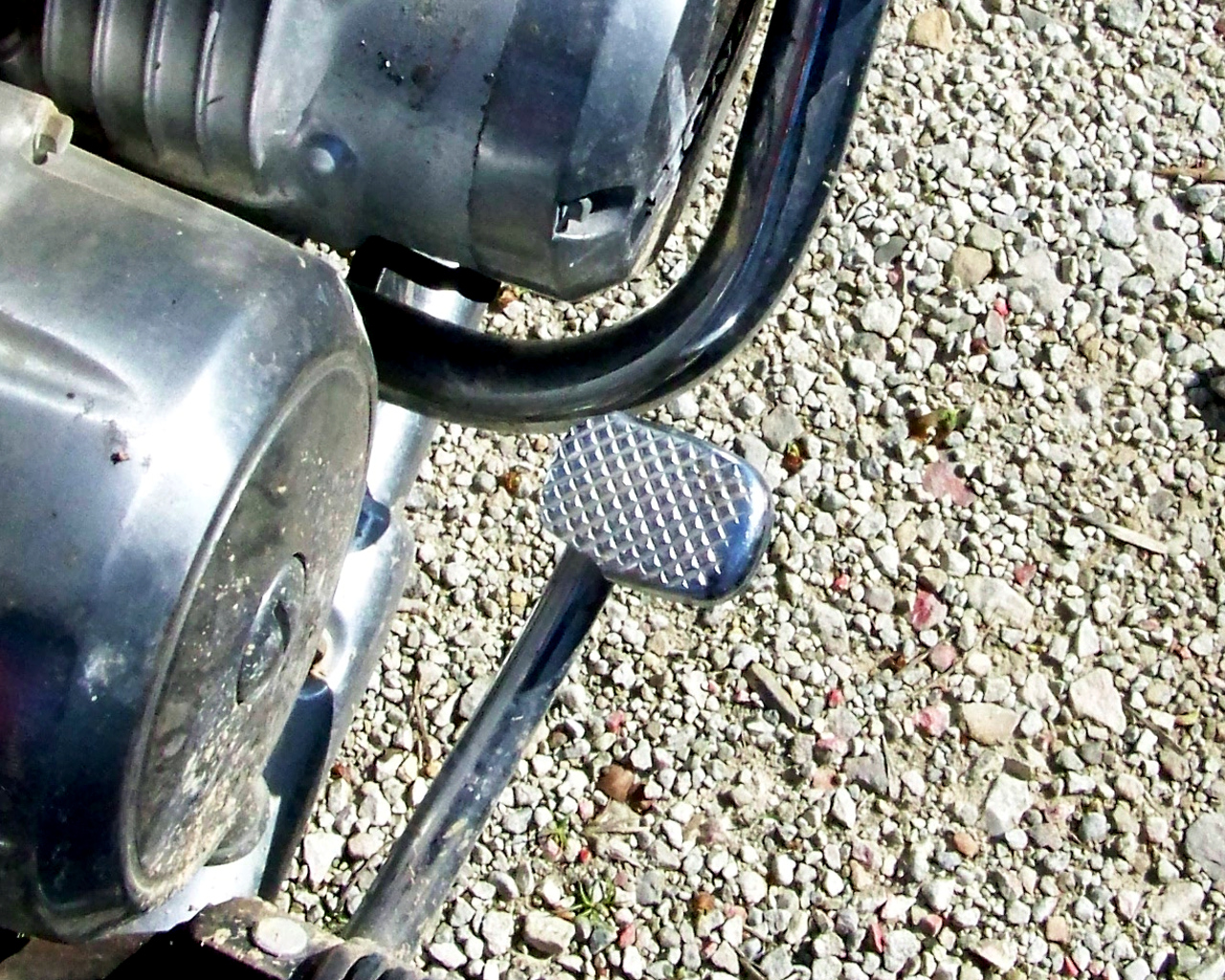